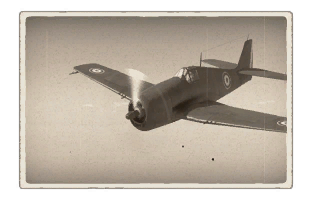 The six machine guns are arranged in bundles of three mounted in both wings. Each is armed with the same amount of ammunition, which means that all guns will fire with each other until empty.

The F6F-5 (France) can be outfitted with the following ordinance:

The key to both surviving and owning in the F6F is to keep your speed up and try to be even marginally higher than your opponents. Below 300 km/h (186 mph) it is very sluggish. As with most American fighters, Boom & Zoom is the preferred combat mode for the Hellcat, while it's average high-speed maneuverability can be used to add in a high yo-yo. It has a lot of ammo, but a good aim is still important since boom-n-zoom only allows you a small window of opportunity to hit your target before you have to climb back to altitude. Still, this is an excellent plane to practice your aim and tactics with because it's more forgiving than most boom-n-zoom fighters. If you don't have a particularly good aim, a good tactic is to open up at 500 m (0.31 mi), starting with your aim on the aircraft, and then slowly move your aim in front of the target. You won't require as much lead when diving on your target at 600+ km/h (+373 mph).

With dual 1,000-pound bombs and six HVAR rockets armed, the Hellcat is a stable game-ending platform in a pinch when the rest of your team is not ground-attacking. The two Tiny Tim Anti-tank rockets can also be useful for taking out more massive targets. Sometimes, it is useful to save the Cat as your last plane just for that. You can always jettison the rockets and bombs if you're suddenly forced to dogfight.