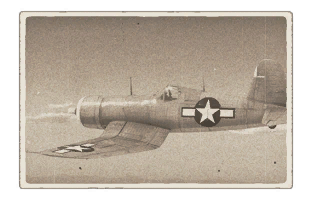 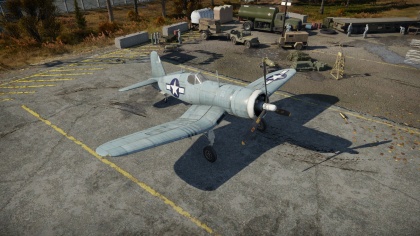 The F4U-1A Corsair is a rank II American naval fighter with a battle rating of 2.7 (AB/RB) and 3.3 (SB). This fighter has been in the game since the start of the Open Beta Test prior to Update 1.27.

This is the first plane you will be able to use in the legendary Corsair line, and it will give you a good taste of what's to come. Sporting a very distinctive silhouette due to its inverted gull wings, it's never hard to pick a Corsair out of a crowd. However, the inverted gull wings are a double-edged sword, as it enables the Corsair to turn well at high speeds and have a good roll rate, but makes it turn mediocrely at low speeds. While not as powerful as its later siblings, the Pratt & Whitney R-2800-8W 18-cylinder radial can still propel the Corsair to a respectable 646 kph at around 6,800 meters. The Corsair also has a weak airframe that is very susceptible to incendiary rounds, so make sure to use your roll rate and good high-speed performance in order to survive.

When flying an F4U, you should use Boom-n-Zoom tactics. This means that you should climb immediately and then dive on lower flying aircraft, then use your speed and momentum from the dive to climb. The Corsair does turn well but loses energy and speed rapidly, so avoid turn fights or flat manoeuvres.

If, while flying a Corsair, a plane with a decent pilot gets to your tail you probably won't be able to outmanoeuvre it, but this goes both ways. If you encounter an F4U that is at low altitude or wasting its energy turn fighting, work your way behind it for a reasonably easy target to shoot down. These planes also seem to be highly flammable, so watch out for incendiaries or ... load up with API rounds yourself and go hunting.

The one plane that should concern any Corsair pilot is the Messerschmitts 109s. They are very dangerous foes to anyone who fights by their rules. You will commonly encounter E-4's and F-1's, but you will occasionally come across the rare F-4 when being up-tiered. The E-4's aren't the most threatening as you can outspeed them by a large margin, but they can still shred you apart easily with their twin MG FF/M's. However, F-1 is a very powerful foe. The first in the Friedrich line climbs better, turns better, and is fast enough to keep up with you, while still sporting a single MG FF/M mounted in the nose. Seek teammate's support if one tries to force an engagement on you.

"The single-engine Chance Vought F4U Corsair was designed in 1938 for a U.S. Navy single-seater carrier-based fighter competition. The prototype showed excellent performance characteristics but was in need of substantial improvement. Even after the completion and launch of the F4U-1, a number of problems were discovered which prevented the aircraft from being used as a carrier-based fighter, and the Navy was forced to use the first F4U-1s for Marine Corps ground-based operations.

The F4U-1A was produced not only at the Chance Vought factory, where the aircraft was designed but also at the Brewster and Goodyear factories (with the designations F3A-1A and FG-1A, respectively). The latter model differed in that its wings were not folding.

The Chance Vought factory produced a total of 2126 F4U-1As."