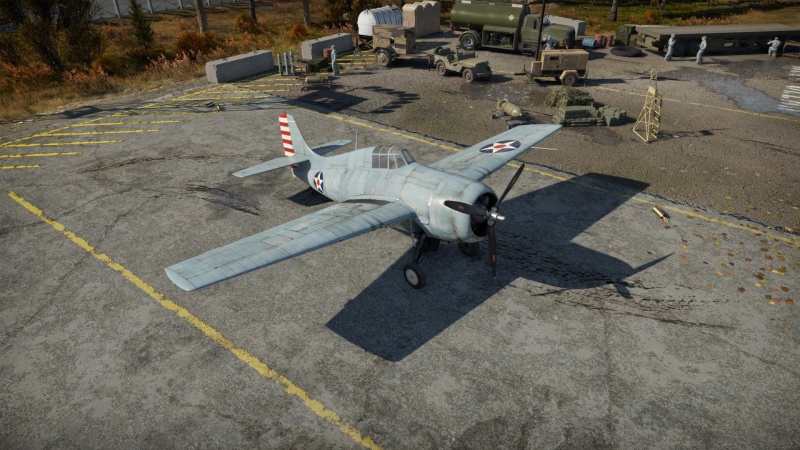 The Wildcat is a beast when piloted well. Its strengths lie in its firepower and diving ability, but it also has the ability to outmanoeuvre most aircraft in War Thunder. This gives you numerous options when dogfighting.

The F4F-3 Wildcat is a good all-around fighter, though its top speed and rate of climb are lacking. It is good to go head-on with opponents from other nations as their aircraft won't be able to withstand the damage that the Wildcat can deal, and the good protection for your pilot added to the overall resilience of the aircraft gives it some pretty impressive defence.

In the air, the Wildcat performs pretty well, with roll rate and turn time being adequate for most engagements. However, on the ground (not on a carrier), it does not perform as well. The acceleration, even when fully upgraded, is subpar on the ground. When taking off, you will find yourself still struggling to take off when most of your teammates are already in the air.

The F4F-3 can be outfitted with the following ordnance:

The Wildcat is an easy plane to fly. It is very manoeuvrable and well-armed for its class. You can out turn pretty much all German and Soviet aircraft, but beware that you don't get into a turnfight with any of the Japanese planes and especially the British Spitfires. The Wildcat will lose a large amount of energy during a dogfight making it sluggish, and therefore an easy target for enemy planes with good energy retention, like the Yak-1.

The Wildcat will have a hard time downing planes simply because it has only 4 machine guns, you will often get matched with the Bf 109 E-3 and F-1 which have powerful cannons and a very good turn rate. The best way to use this plane is to BnZ since most of your opponents are less armoured and are slower. You can also out turn some of the Soviet aircraft, but you cannot simply dive away, as you may rip the wings off.

During the early years WW2, the United States' main fighter in its navy was the F4F Wildcat, one of the first monoplane navy fighters of its era. It served well in many battles, like the battle for Wake Island, and most notably in the battle of Guadalcanal. It was a very reliable aircraft, however, was constantly challenged by the infamous A6M2 and A6M3 Zero. However, most of the time skilled pilots like John Smith were able to out-dogfight more manoeuvrable fighters like the Zero and Oscar in those battles.