The main thing to take into account when using the F3D-1 is that it is not made to combat other planes. It has four great cannons, but you will rarely be able to get them on target unless you are fighting lower rank vehicles or you manage to take an enemy aircraft by surprise. It is unsuited to the complexities of high-rank jet combat, having a poor climb rate, below average top speed and mediocre manoeuvrability. Instead, this plane works best as a ground pounder, working closely with fighters to keep it safe from harm. In other words, your team needs to have air superiority in order for you to be effective. Your cannons are effective against light vehicles and vehicle top armour. The 2000 lb bombs are powerful enough to destroy any target, allowing you to pinpoint dug in vehicles and end their game quickly. You also have access to Tiny Tim Rockets, which have extremely high penetration and post penetration damage. After dropping your payload and strafing targets, you can quickly return to base and rearm.

It is best not to linger over a combat zone, as your presence will attract the attention of players, who may spawn in fighters or SPAA and try to shoot you down. In higher rank matches, SPAA will jump at the chance to shoot down a slow, lumbering jet like you. Instead, it is best to quickly pinpoint a target, destroy it and then return to base. Keep on doing this as many times as you can. Fly low and around the edge of the map in order to avoid any anti-aircraft guns, observing the map and looking out for any potential targets. If you attract any unwanted attention from an enemy aircraft, your first point of call should be to call for help. It can save you a lot of hassle if a friendly SPAA or fighter can take out the enemy plane. If not you will need to analyse your enemy and work out if you have any advantages over it. If it is a high-rank plane like a Mig 15 or Sabre, your options are pretty limited. Your chances mostly depend on your skill to outwit your opponent, or their skill to outwit you.

The F3D-1 ‘Skyknight’ first appeared over the skies of North Korea as the world's first Carrier based jet nightfighter.  While it did see some action it was noty the Marines. After Korea, the F3D was used in testing the then new Air to Air Missiles (AAM) such as the AAM-N-2 Sparrow I.  It was also used in testing new F3D’s for futur that effective downing only six MiG-15. It was however, the most successful naval jet fighter of the war. While it was used by the Navy, the most ‘Skyknights’ were deployed be wars such as the next war in Vietnam.  The ‘Skyknight’ was the only Korean War fighter to serve and see combat in the Vietnam War. Just before fighting in the Vietnam War, its designation was changed from the F3D to the F-10. F-10s were used as electronic warfare and jamming aircraft against the newest threat, the SA-2 Guideline Surface to Air Missile.  It was used as an EF-10 because of its enlarges fuselage design for it to carry advanced radar systems. In 1969 though, all US Navy F-10’s were retired and used for testing on the new avionics systems that were implemented into the F-14 Tomcats. The Marines used their F-10’s until May of 1970. 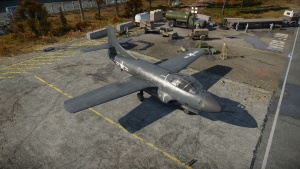