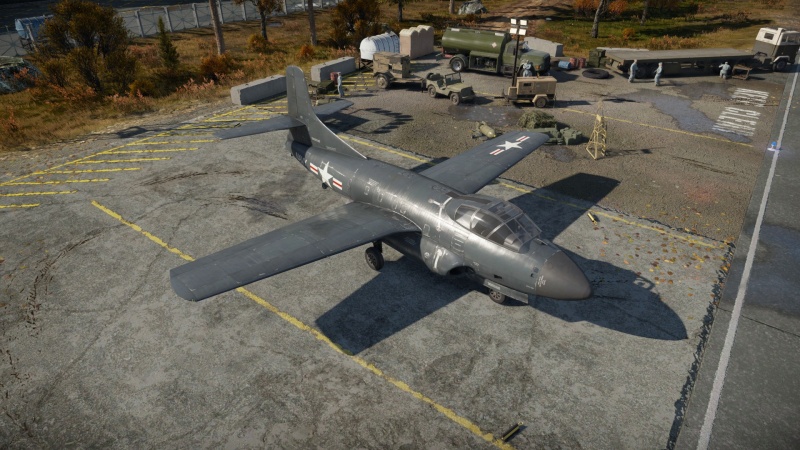 The F3D-1 is pretty good in a dogfight with the right energy situation. While it may not be able to out-turn every enemy it faces, it has decent enough maneuverability to face the majority of the planes it faces. The plane does suffer from a relatively poor climb rate and below average top speed, but once it gains the altitude it needs to gain speed, it can be quite a fighting plane.

The 20 mm can cause a lot of damage if it does catch the enemy. One important note is to avoid large dogfighting furballs, as there will be an enemy Me 262 or other jet that will notice the large F3D-1 and aim to gun it down. Instead, use the F3D-1 to go against outliers and stragglers to deal with them one by one.

If the plane's flight performance is not to one's liking, one can use the F3D-1 as a ground-pounder. Allow teammates to gain an aerial superiority in the fighting area while using the guns and suspended armaments to attack ground units. The cannons are effective against light vehicles and vehicle top armour. The 2000 lb bombs are powerful enough to destroy any target, allowing pinpoint targeting of dug-in vehicles and end their game quickly. The F3D-1 also has access to Tiny Tim Rockets, which have extremely high penetration and post penetration damage. After dropping the payload and strafing targets, quickly return to base and rearm to return with more weaponry and effect.

It is best not to linger over a combat zone, as the F3D-1's presence will attract the attention of players, who may spawn in fighters or SPAA and try to shoot it down. In higher rank matches, SPAA will jump at the chance to shoot down a slow, lumbering jet like the F3D-1. Instead, it is best to quickly pinpoint a target, destroy it and then return to base. Keep on doing this as many times as possible. Fly low and around the edge of the map in order to avoid any anti-aircraft guns, observing the map and looking out for any potential targets. If the F3D-1 has attracted any unwanted attention from an enemy aircraft, the first action should be to call for help. It can save a lot of hassle if a friendly SPAA or fighter can take out the enemy plane. If not, the F3D-1 pilot will need to analyse the enemy and work out if the F3D-1 has any advantages over it. If it is a high-rank plane like a MiG-15 or Sabre, the options are pretty limited. The F3D-1's survival chances mostly depend on the pilot's skill to outwit the opponent, or their skill to outwit the F3D-1's pilot.

While the F3D-1 stayed stateside to train pilots and radar operators, the F3D-2 were sent to the Korea War in Spring of 1952.[2] The F3D-2 Skyknights were assigned to Marine Corps night fighter squadrons to escort bombers in nighttime raids.[3] While there, the F3D Skyknights racked up one of the best aerial victory record in Korea for a night-fighter, even scoring the first aerial jet-to-jet night victory against a Yak-15 in 03 November 1952. Only one F3D Skyknight was shot down during the rest of the Korean War.[4]