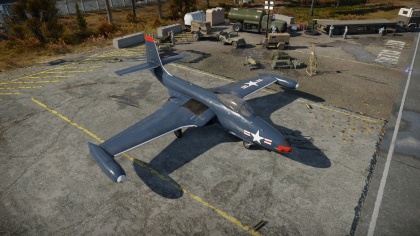 The Banshee is a very stable platform at HIGH speeds. Warning appears at 940 kph; but it can reach over a 1,000 kph and still not rip apart, if flown carefully and kept it in a straight line.

Two engines for redundancy. If one is taken out, the machine can still return to base safely. A good advantage to have, due the fragility of jet engine regarding bullet impacts.

Its main usage will be basically acting as a support fighter in EVERY situation, unless you are down-tiered and you are put against Ho-229's and Me-262's. In such a case, you can become an aggressive fighter and easily get three or more kills. Although, if you are put up against MiG-17's, MiG-15's and La-15's, best prepare yourself to side-climb and be behind your allies. Get some altitude, get some patience and get ready to take out baited MiG's that are either chasing Hunter's or Sabers, or an unfortunate bomber.

A good recommendation is that you should never go for IL-28's alone. Other recommendations is that you should never strap in rockets to this thing or bombs, unless you're in a squad and you all have the purpose of bombing points together. It is NOT recommended, either way. Another tip is to always try to hold your speed and REMEMBER to use your airbrakes when being tailed by a MiG.

The Twin Engine F2H Banshee was a follow up to McDonnell's successful FH-1 Phantom. The two aircraft appear very similar. Primary differences include larger airframe, armament, and power-plants. The F2H Banshee was designed to become the Navy's next carrier born aircraft. Nearly 800 Banshees were built. The aircraft was quickly passed over by newer designs.

A majority of the F2H's service took place in the Atlantic and Mediterranean oceans. A few Banshees found their way to Korea with the Navy and Marines. VF 172 was deployed to Korea in August of 1951 and immediately saw action escorting B-29s. the Banshee saw limited fighter/bomber duty. The greatest role the F2H played was photo recon. Several aircraft were refurbished and sent to Canada were they saw limited service until the 1960's.