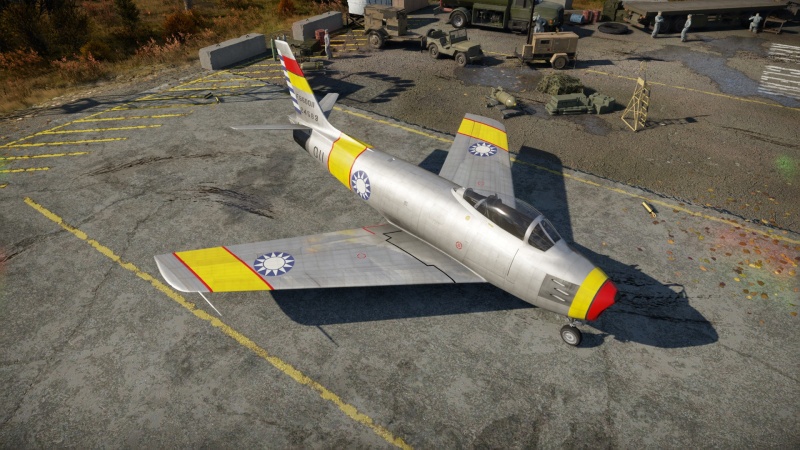 While the F-86F-40's acceleration and top speed are lacking compared to its contemporaries, the F-86F-40's slats allow the plane to have an outstanding manoeuvrability. That said, one must be aware of their speed as pulling high manoeuvres at high and max speed can put the plane under great stress which leads to the wings falling apart. The outstanding manoeuvrability comes at the cost of speed. Pulling hard turns will bleed your air speed.

The F86F-40 JASDF were U.S. airframes assembled by Mitsubishi in Japan, and they offered the same offensive armament of many of its Sabre brethren, namely the 6 x M3 Browning 12.7 mm/.50 calibre machine guns. These machine guns are similar in performance to their predecessor, the M2 Browning; however, they excelled with a significantly higher rate of fire. The total ammunition count for this aircraft is 1,800 rounds, divided up with 300 rounds per gun. Ammunition belts for this aircraft are conventional 12.7 mm belts found on U.S. aircraft, and typically the tracer belts permit for the quickest correction of aim. Other belts may be utilised as necessary and depending on play-style such as the Stealth belts; however, these should be used by skilled pilots who already understand the firing aspects of the M3 Brownings and bullet performance. One challenge with the Stealth belts is the lack of tracers, making it much harder to correct aim when solely relying on visual clues.

Try to climb up before engaging the enemy to ensure you have enough energy to get out of a sticky situation. Hopefully, there will be a jets fighting underneath you where you would be able to pounce on low-energy fighters with your guns or the AIM-9B. One advantage the F-86 has over the jets of other nations is the large ammo count of its 6 x 50 cals (1,800) although it would be wise to hit most of your shoots. Try staying above 500 km/h as any slower and you would lose a significant amount of energy in a prolonged turn.

In air realistic battles, the F-86F-40 (China) is not the fastest jet at its BR when it comes to top speed. The thrust output is below average and without an afterburner, the jet does not accelerate fast either. It is best to take off and do a slight side climb while paying attention to aircraft like the Harriers who could try to fly over the team. It is important to maintain at least 600 km/h IAS because any slower the Sabre will struggle to dodge enemy missiles. Once a furball is started, proceed into it and pick targets who are low on energy. The F80F-40 should take advantage of its wings and good energy retention. Combind with a good roll rate, no enemy should be able to shake you once you are on their tails. Watch for attempts by enemies to force you to overshoot. In late game Air Realistic Battles, there will be more freedom to how slow a fight can get. If you know where the enemy is, you can afford to stall climb and get a missile off to a climbing enemy F-104A.

In Mixed ground battles, the F-86F-40 (China) is a good all-round aircraft. In ground attack, the HVAR rockets is a good option against lightly armoured SPAAGs or light tanks. The 1,000 lb bombs are good but both drop at the same time only giving chance for one attack round per landing. In air superiority role, the Sabre is a good helicopter hunter with 1,800 rounds of .50 cal, which is enough to take care of any amount of enemy UHT or Apache helicopter. Enemy fighters should be engaged with care: keep away from the battlefield before climbing to avoid enemy SAMs. It is however the better air-to-air fighter as the other option for China at this BR is the Q5 with better climb and top speed but no missiles.

In air simulator battles, the F-86F-40 (China) is an excellent turn rate fighter. While the wings with slats do give a lot of angle of attack before stalling, they're also great for turn rate fights. This Sabre will be able to outturn most jets it can face, at anywhere between 400 and 800 km/h. It is recommended to stay above 600 km/h IAS because any slower the Sabre will struggle to dodge enemy missiles. The AIM-9B should be able to deal with any running/climbing enemy. However, enemy with RWR will get notified if the rangefinding radar is turned on and may drop flares. It is best to keep the radar off when launching a missile attack against aircraft like the German Starfighter or the Mirage III. In battle, stay low and fast and by the time you are up close to your enemy they would not be able to outrun the missiles or outturn the Sabre.

In ground simulator battles, F86-f40 can be a multirole fighter depending on the task to complete. In ground attack, the HVAR rockets will struggle with most targets at the top Simulator bracket, but do offer better accuracy per 100 m when compared to the Bombs. The 1,000 lb bombs are very reliable against all levels of protection but take a higher approach for a accurate drop (lack of bomb sight). In an air superiority role, the Sabre will preform even better than it did in Air Simulator battles. The 6 x .50 cal MGs will make quick work of any enemy helicopter, even if they try to manoeuvre, the Sabre's roll rate should allow for last second adjustments. Turnfighting enemy fighter also got easier as the chances of them carrying bombs/rockets are up, thus limiting their performance. Tree-top level flying should be practiced to avoid SAMs. -->

The F-86F-40 is equipped with an AN/APG-30 rangefinding radar, located in the nose of the aircraft. It will automatically detect other planes within the scanning area and display the range to the closest target. It is linked with a gyro gunsight and can help with aiming at close range. Note that this Radar will trigger RWR of enemy helicopter and jet and may lead to them using flares which will defeat the AIM-9B.

The F-86F is a further development of the F-86E, which introduced a full power-operated control system and the all-flying tail, in which the entire horizontal stabilizer moves to significantly increase the aircraft's manoeuvrability at high speed. The F-86F is fitted with the uprated J47-GE-27 engine. The leading edge slats featured on earlier Sabre models were removed in later production versions of the F-86F in favor of more space for fuel. Some of the earlier F-86F models had the static leading edge slats retrofitted. It also carried over the capability to carry tactical nuclear weapons from the F-86E.

In 1954, the Republic Of China, led by Generalissimo Chiang Kai-Shek's Kuomintang, started to order F-86 from the US. Next year, RF-86F, reconnaissance versions of the F-86F, were delivered to the Republic Of China's Air Force (ROCAF). During the second Taiwan Strait Crisis in 1958, the F-86 composed the backbone of the ROCAF. Through "Operation Black Magic", ROCAF Sabres were equipped with AIM-9B Sidewinders, which proved effective against the People's Liberation Army Air Force's (PLAAF) MiG-15s and MiG-17s. One was reported to have hit a MiG-17 but failed to detonate, the missile was later brought back to mainland China and later given to the USSR, where it was reverse engineered into the R-3S.