Difference between revisions of "F-84F (IAF)" 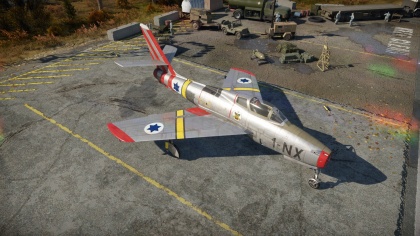 The F-84F Thunderstreak is a premium rank V French jet fighter with a battle rating of 8.7 (AB/SB) and 8.3 (RB). It was introduced in Update "Hot Tracks".

The F-84F (IAF) can be outfitted with the following ordnance:

In the late 1940’s, the manufacturer ‘Republic’ sought to improve the performance of the F-84 in order to bring it closer in line with the F-86 Sabre. As a result, it developed a new variant of the Thunderjet, designated F-84F. The new aircraft featured, among other changes, a new swept wing and a more powerful engine than its predecessor. Although Republic initially intended the new aircraft to be an extensive modernization of the base F-84, possessing a high degree of part compatibility with preceding variants, in the end, only less than 20% of the parts were interchangeable, resulting in the F-84F Thunderstreak becoming its own independent design.

Following its maiden flight in the early 1950’s, the F-84F was ordered into production. However, the USAF focus on strategic bombers at the time resulted in some critical component manufacturing processes being prioritized for bomber production, ultimately leading to a staggered production start of the new F-84F.

The Thunderstreak officially entered service with the USAF in 1954, but was quickly phased out of active service due to engine issues before being reactivated in the early 1960’s as tensions between the two superpowers began to rise again. Ultimately, the F-84F kept flying under American colors well into the early 1970’s before finally being retired as newer aircraft replaced the Thunderstreak in active service.