Difference between revisions of "F-80A-5"

The main purpose of the F-80 is to teach a pilot how to fly jets in general. If a pilot is doing well (read: has even or close to even k/d) in the F-80, he's ready to move to higher-ranked jets. Never give up your speed: it is the plane's insurance. Only trade it for the altitude in zoom climbs!

Be careful that the jet is up-tiered quite a lot. When this happens, strictly adhere to the rules set forth in this article or you will be at a great disadvantage.

One thing to take note of is the M2 Brownings. Sadly, they are insufficient for high-speed combat due to the low rate of fire and subsequently limited damage output; be aware, however, that they still pack a punch in partial headons with 262s, 229s, and the like. The issue is later on fixed with the M3 Browning on the successor F-80C Shooting star, but the ammunition load still remains low, like on the P-51D. As for piston planes: they are capable of setting enemy piston planes on fire in a short burst. All of the guns are mounted in the nose, making them deadly accurate when performing head-ons, especially once the "new 12 mm MGs" modification is installed. For ground attack, there is the usual complement of an ordinance for the USAF: HVAR rockets and standard 1000 lb bombs.

The F-80A-5 can be outfitted with the following ordinance:

This plane must be flown strictly as Boom-and-Zoom, or Boom-and-Run. Anything else does not work due to the aircraft's inferior acceleration compared to props and some Axis jets at certain speeds.

For ground strike, the F-80 is a decent aircraft, carrying the USAF standard of bombs, rockets, and ground attack belts. It is not recommended to hit ground targets unless an enemy bomber is spaceclimbing, however; this is a fighter and not a lumbering attacker, and should be used to shoot down enemy aircraft.

At the beginning of the match, the P-80 needs to climb away from the potential combat zone.

As of 1.99, the F-80 is locked in 7.0-7.3 matches against Axis jets, with the occasional mixed game in-between. This means it is always equal-tiered to its opponents, or a mere BR step below them. The F-80 is one of the fastest aircraft at its rank; however, due to its bad acceleration it must maintain energy discipline. Hard turns are taboo; turn to engage, not to follow. Opponents like the 229 can potentially outrun the F-80; however, due to the F-80A-5's higher acceleration at 650-750 IAS compared to a Horton, it is possible to keep up with one for a while.

As with most early jets, the acceleration is sub-par, so Compressor and Engine should be focused on first, then a choice between Airframe, New Boosters or the Offensive 12 mm. Wings Repair is recommended to help with the F-80's average maneuverability. Afterwards, the G-Suit upgrade will come in handy. Fuselage Repair and Cover are not really useful and can be ignored until the very end, although Airframe can be used to help the mediocre durability (the tail control will burn away instantly when you catch on fire unless you have Airframe). 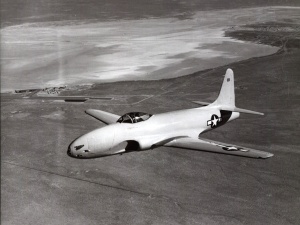 The F-80 Shooting Star was an American straight-wing jet aircraft. It was the first American-designed jet fighter to enter service, and served for a short time in the Korean war before being replaced by the more capable F-86 Sabre. The aircraft was designed in just 143 days[1], and as a result, suffered from many critical issues; the aircraft was responsible for the deaths of several test pilots, including Richard Bong, America's highest scoring WWII ace[2]. The aircraft, originally intended to fight the Me-262 over the skies of Europe, arrived too late to see service in the Second World War. However, the plane would go on to serve in the Korean War, where it was the first American jet to see combat.

The F-80 Shooting Star was the product of a design project started in mid-1943. At the time, Lockheed had been asked to produce an aircraft using the De Havilland Halford jet engine, capable of fighting the Me 262 Schwalbe on more-than-equal terms. As a result, a production prototype (see photo) was developed in just 143 days. This was a huge feat, as the aircraft was a full-scale prototype with functional armament. The aircraft was produced in a large tent in complete secrecy, while the team responsible for it's production would become the predecessor to Lockheed's famous 'Skunk Works'[1].

Though the aircraft design was promising, it soon became evident that the aircraft's rushed development had led to a variety of design flaws. The aircraft was hypersensitive in pitch, had engine and flap issues, and even baked the pilot as the cockpit temperature rose to a sweltering 180 degrees Fahrenheit (82 degrees Celsius) during flight[2]. However, following a large funding boost, the major issues (including the cooked pilot) were solved. By late 1944, the P-80 program was a similar priority level as the B-29, and 1000 aircraft had already been ordered. This massive rush resulted in many fatalities - Lockheed's chief test pilot was killed following an engine failure, while four additional pilots (including Major Richard Bong) were killed in various accidents. The rising number of fatalities brought the P-80 program to a halt - as a result, the aircraft was given a large number of safety modifications to improve it's reliability in flight[2]. However, the biggest hit came in September of 1945, with the end of WWII. The USAF, looking to reduce costs, cut the total orders from 5000 to 2000. Nevertheless, the P-80 entered production.

The first pre-production YP-80 aircraft were ready just before the end of the war, but failed to see operational service. However, nearly 1700 P-80s were produced between 1946 and 1948, 924 being of the P-80A and P-80B variants. These aircraft had been re-engined with the Allison J-33, producing more power thus increasing the aircraft's combat capabilities. Starting from 1947 following the separation of the USAF, the P-80 was renamed the F-80 in accordance to new designation guidelines[1].

The newly-introduced aircraft soon began to set records. In 1946, the aircraft became the first jet to cross the continental United States, from Long Beach to New York. In 1947, a specially modified F-80 set a new aviation speed record of 623 mph (1002 kph), which it held for a very short duration of time[3].

The F-80A had a short service life, having been replaced by newer F-80B and F-80C aircraft. As a result, the F-80A variants would never see combat, having been relegated to advanced training roles before the start of the Korean War. The F-80C was luckier, and saw combat over the Korean Peninsula as a fighter-bomber. By the end of the Korean war, the F-80 had flown almost 100 thousand sorties, dropped 41 thousand tonnes of bombs and destroyed 58 aircraft[2]. Quite an impressive track record for an aircraft built in a circus tent.