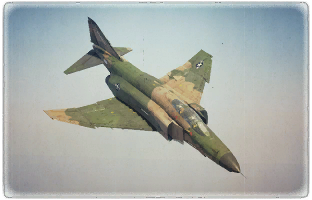 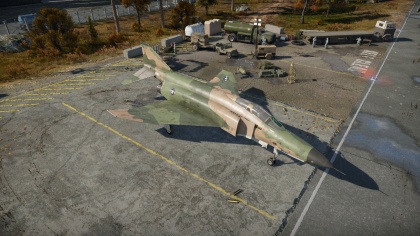 The F-4E Phantom II is a rank VI American jet fighter with a battle rating of 10.7 (AB/RB/SB). It was introduced in Update 1.97 "Viking Fury". This twin-engine aircraft is powered by two General Electric J79-GE-17 jets, each producing an incredible 8,010 kgf on maximum afterburner. This multi-role vehicle is among the top fighter jets in the game and also a supremely capable ground attacker.

The F-4E Phantom II is armed with the following offensive weapons:

The F-4E Phantom II is well-suited for any in-game situation. For attacking ground targets, the plane is armed with an assortment of bombs and rockets, and against air targets, players may employ the vehicle's deadly air-to-air missiles and frontal cannon. If desired, three externally-mounted gunpods may be equipped, but note that these may not be useful in certain situations. Although they will undoubtedly increase the vehicle's destructive capabilities, they also appreciably hinder flight performance through induced drag. In many situations, one front-facing cannon is all that is required to dispatch an opponent aircraft. As for the missiles, the ones used by this plane are among the best in the game, comparable to the R-60 missiles equipped by the MiG-21MF (Germany) and the MiG-21SMT. The AIM-9J missiles are most effective when fired from between 1 to 2 km away from the target. Any closer and they will struggle to track and likely veer off target for a miss.

The F-4E has one of the highest rates of climb out of any vehicle in the game, and is also one of the fastest, especially below 5,000 m altitude. It also has good to excellent acceleration at all speeds, unlike the MiG-21SMT, which only has above-average acceleration at speeds above 700 kph. This means that the Phantom is much more forgiving in dogfights since any lost speed can be regained fairly quickly.

Unlike the F-4C, this vehicle is equipped with leading-edge slats, which increase the aircraft's manoeuvrability. The plane has the best turning ability between 700 and 900 kph, although it has competitive turn rates at all speeds. However, as with all top-tier fighter jets, extended turn-fights should be avoided, since they bleed much speed out of this heavy aircraft and leave the pilot defenceless against nearby vultures. Specifically, watch out for the J35D Draken, which will beat any of its contemporaries in an extended turn, and also keep an eye on nearby Mitsubishi T-2 and MiG-21 pilots: although these aircraft don't do as well in extended turns, they can pull a significant angle of attack in the first few moments of a turn-fight.

In air realistic battles, it is recommended to take a balanced fuel load of 20 minutes, allowing ample usage of afterburner but also reducing the mass of the aircraft to improve its performance. It is also recommended to take armoured-target belts for the internal 20 mm cannon, as well as 4 AIM-9J air-to-air missiles. This setup will maximize the vehicle's anti-air capabilities.