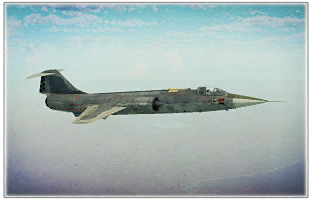 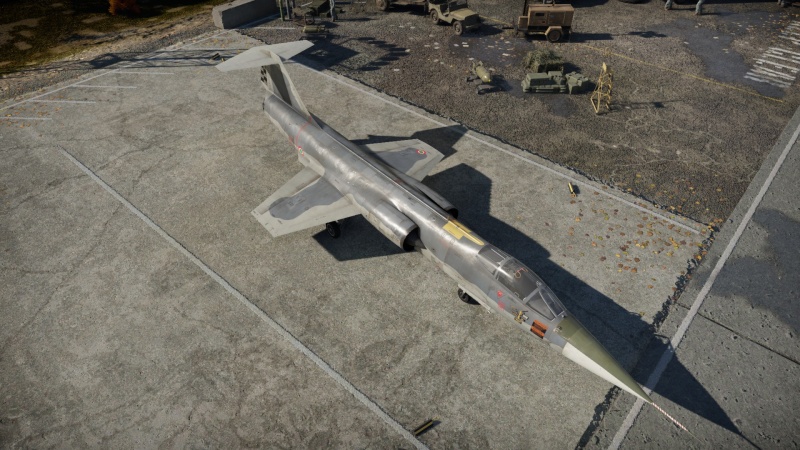 The F-104S.ASA is an Italian supersonic interceptor based on the American Lockheed F-104 "Starfighter" series. The external appearance is much the same besides the additional ventral fins, but as the final variant of the Starfighter family, it boasts the best speed and payload capacity of any F-104. It can be used as a high-speed ground attacker with a sizeable load of assorted bombs and rockets. Alternatively, it can be a deadly interceptor if equipped with air-to-air missiles. Unique among Starfighters is its ability to carry a pair of Selenia Aspide semi-active radar homing missiles.

The F-104S.ASA is not equipped with any armour plating, and is therefore rather vulnerable to enemy fire, especially given the fact that most enemies at this rank sport high-calibre cannons. Taking any critical damage in the F-104S.ASA will almost instantly cripple it, to the point where you will have to fly back to base, or be a sitting duck for the enemy team. Taking a critical hit to the fuselage will disable you so badly you won't be able to reach supersonic speeds, which is your greatest advantage. The same goes for taking any sort of wing damage or tail damage: it will instantly result in a huge amount of drag on the air frame, reducing your already poor energy retention in manoeuvres making you an easy target to pick off from afar and in effective gun range. Lastly, the engine is a massive target for guns and missiles alike. Having a slightly orange engine will effectively put you out of the fight. And with the already heavy weight of the F-104S.ASA, you require the engine power to stay in the fight.

The F-104S.ASA can be outfitted with the following ordnance presets:

The one thing the F-104S.ASA does extremely well is speed, it is one of the vehicle's greatest advantage, and can be used to great effect if the pilot is careful about choosing which engagements to pursue. It is recommended to keep up a high air-speed at all times, which will allow the F-104S.ASA to swoop in and out of the combat zone while evading enemies. Sometimes, it is even possible to outrun enemy air-to-air missiles.

However, the F-104S.ASA struggles with manoeuvrability. With such small wings, it simply can't produce the lift necessary to throw itself around the sky, and therefore has a very poor turning circle. This means that any turning engagement is most likely futile, and also re-emphasises the utility of a boom and zoom playstyle.

When used in conjunction with its speed, the available armaments really allow the F-104S.ASA to shine. The AIM-9Ls, already difficult to dodge with their good manoeuvrability and flare-resistance, become nigh-on impossible to avoid when launched at supersonic speeds, particularly against much slower targets. The Selenia Aspide can also be a welcome addition in a high-altitude, long-range, all-aspect engagement however you will have to compromise for the 20mm Vulcan. Speaking of which, the extremely accurate and powerful M61A1 Vulcan cannon can be used instead for quick head-ons and to mop any remaining opponents at close-range.

Unlike the F104S, the ASA is able to bring countermeasures to give it a fighting chance against the top dogs of the air. Your main enemies will be aircraft such as the F-14 Tomcat or the MiG-27, it's best to try and avoid close engagements and instead focus on picking people from afar. As previously mentioned, you will not be able to turn well at high speeds so make sure that every person you engage won't become a threat if things don't go your way.

Main article: History of the F-104S

An upgrade program was carried out in the 1980s while the Italian military was working on the Eurofighter Typhoon, resulting in the F-104S-ASA (Amodernamento Sistema Arma; "Weapon Systems Upgrade"). The ASA is differentiated by the additions of the AIM-9L Sidewinder missile and the Italian Selenia Aspide semi-active radar homing missile. The avionics, countermeasure systems, and weapons were improved, however the cannon could not be carried along with the missile guidance equipment due to improvements in avionics. The ASA was also tested with Flare and Chaff pods, which was also one of the notable improvements over the S variant. The ASA would be updated once more beginning in 1995-1997 to the ASA/M standard. The changes were relatively minor and limited to the addition of modern AIM-9Ls, overhauling the electrical system, and adding new navigation features. These changes also resulted in a pure interceptor and therefore could not carry rockets or bombs.