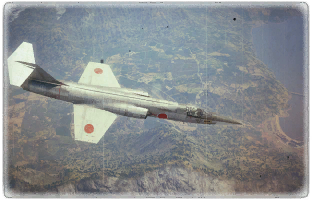 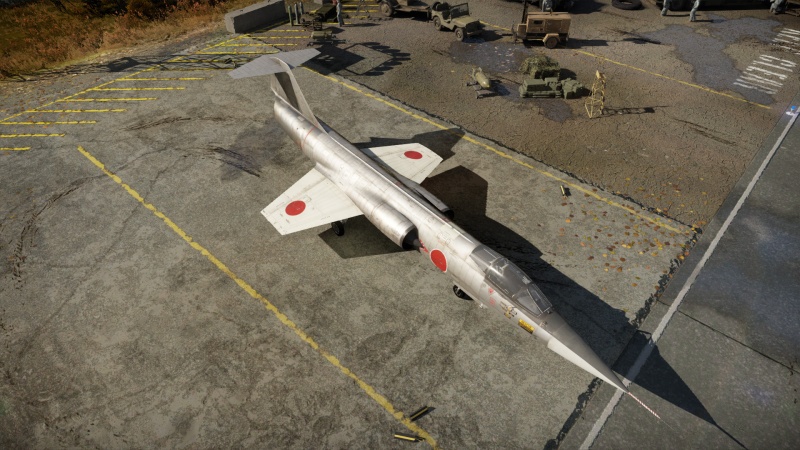 The F-104J's performance can be summarised in one word: speed. For it to work effectively, you must be fast. Below 1,000 km/h, your elevator will be ineffective for any sort of combat manoeuvres. Though it may be helped by the deployment of combat or takeoff flaps as speed allows, even those will not be able to keep up with the other aircraft it faces at its battle rating. This being said, the aircraft is very responsive overall, especially in the roll aspect.

The short wings must be discussed with some nuance. Though they allow for great roll authority, their effectiveness at low speeds is severely limited. Below 6-800 km/h, you will find that level flight is difficult, if not impossible. Due to this, a very high landing speed is required, which amplifies small mistakes. Even with the perfect pilot, landing this aircraft every time is going to be a challenge.

Finally, the aircraft is only fast in a straight line. When turning, it loses significant amounts of speed, often losing any energy advantage it may have had before the turn.

The aircraft has some survivability, although it should be noted that due to its small size, any hits to the rear of the plane are very likely to cause engine damage, which will be problematic due to the horrible gliding ability of this aircraft. The structure, however, makes it difficult to knock out the pilot from behind. Also, due to the high tail structure, it is easy to destroy the tail entirely, which will result in a near total loss of control. Though the flaps may be utilized to some extent, at lower speeds they will falter, making it very hard to take a damaged aircraft back to the runway.

When a wing is fully lost, the aircraft will suffer from extreme roll which may only be countered by use of the rudder and remaining aileron simultaneously. At this point, the aircraft is practically impossible to land and should be considered lost.

The plane also has no armour protection.

The F-104J can be outfitted with the following ordnance:

The F-104J is a difficult aircraft to fly and be competitive in without a doubt. It requires a completely unique set of tactics and manoeuvres that must be utilized without fail, or it will result in a loss. The F-104J should not be intentionally placed in a dog-fighting scenario. In the overwhelming majority of situations, you will lose the engagement due to your inferior mobility at all speeds. Though it is possible to do such things, and it is up to the judgement of the pilot on whether or not it will work out in a win, it is unlikely to happen. Particularly, there are two situations that the pilot should be aware of.

The first is the reversal. Due to the great manoeuvrability advantage of most other aircraft at your battlerating, you will often find yourself with an enemy aircraft behind you in seconds. If you have the energy advantage, do not panic. Chances are, you can successfully escape. However, if not, you should panic because the enemy will likely simply fire air-to-air missiles until your speed is sufficiently reduced to either result in a missile or gun kill.

The second is that of the failure of the classic "boom and zoom" tactic, where the pilot will engage an enemy with less altitude and speed than them, then regain their lost altitude after the attack. This will often fail in this aircraft due to the poorer energy retention in a climb and the fact that you will often be engaged by air-to-air missiles. In this situation, you should wait before the enemy is at a safe distance before resetting your altitude.

Outside of simply keeping speed up, typically above 1,000 km/h, the plane should fly in a straight line as much as possible, as manoeuvring will bleed speed rapidly and further hinder the aircraft's effectiveness in battle.

Overall, when used correctly, the F-104J can be a serious threat to the enemy, though it is easily countered in some situations. The 20 mm cannon is capable with 750 rounds and good impact on target, and its AIM-9P missiles are very effective at killing enemy jets.

The F-104J is equipped with an NASARR search and tracking radar. The radar is mounted in the nose of the aircraft.

The F-104J was a specialized interceptor version of the F-104G for the JASDF, built under license by Mitsubishi for the air-superiority role; it was armed with a cannon and up to six Sidewinders (evidence shows it only ever carrying 4 in active operation), but had no strike capability. Called Eiko (栄光, Glory) and sometimes nicknamed by pilots as the Mitsubishi Pencil, they served from October 1962 to 1986, losing only 3 airplanes in this time including a mid-air collision accident. Seven air-superiority squadrons used them: 201, 202, 203, 204, 205, 206, 207. Japanese F-104s faced intrusive Soviet airplanes during this long service.

With Lockheed gaining ties with the JASDF after introducing the T-33 Shooting Star trainer-jet for the Japanese Airforce. Considering Japan didn't massively import airplanes from the US and with an upcoming next generation of jet planes which would replace the Japanese F-86's by F-100's which are both from North American Aviation made it quite a competition for Lockheed to sell their product instead.

In 1957 Japan sent a investigation team to the USA to wage their options and viable planes for the task at hand. With the increase of Soviet bombers and their potential threat towards Japan and its airspace, the qualifications of the planes being set at:

4 American jets could meet the requirement and these were: NAA F-100, Convair F-102, Northrop F-5 and Lockheed F-104. At the time only the F-100 was proven and in use by the US Air Force, the F-5 was stil being designed, the F-104 just made its maiden test flight and the F-102 was the most expensive. Out of this it seemed like the easiest and best option would be working with North American Aviation as they already had close ties with Mitsubishi considering they licensed their previous era of jets being the F-86 and announced the proposal of the F-100J, an all-weather interceptor variant with nose-mounted radar especially for the JASDF.

On the 13th September of the same year the investigation team returned to Japan and submitted their report, but conclusions weren't specified and postponed. It was rumoured that the F-100J would have a short run production until a full conclusion was made on which jet Japan's next generation of air-defence jet would be but this plan was fully taken off the table by the then prime minister, Nobusuke Kishi, which dubbed the F-100J as a "Fighter-Bomber" which the defensive nation of Japan didn't need.

In January 1958, the chief of the JASDF, Sadamu Sanagi, had conducted a selection from going to America, and submitted a report after returning home. In the report, the candidate aircraft were narrowed down to F-104 and G-98J (planned variant of the F11F-1 Super Tiger). Accidents with the F-104 just deployed to the US Air Force, the fact that the aircraft required a 3,000-metre runway and insufficient data link capacity made the option clear for the Defense Agency and decided to adopt the G-98J-11 in 1958.

However, a fair share of criticism for adopting a vehicle that hadn't been proven yet and was still in its development stage made the Agency re-evaluate their choice and eventually withdraw it after a quote of another Chief of staff of the JASDF, Minoru Genda, saying 「乗ってみなければわからない」. He was flown to America to test this new variant of the G-98 and concluded that the G-98 is a Mach 1 class aircraft that was forcibly raised to a Mach 2 class, it might have great subsonic performance and acceleration but this was neglected once it actually broke the sound barrier due the swept wing design.

On the contrary the F-104 had a straight wing design creating higher drag at subsonic speeds but way better supersonic acceleration and maneuverability which made the difference in performance between the two very clear. After all the negotiating and carefully considering the options, they decided that it would be better to choose the F-104 as it fills the role of Interceptor at mach 2 better than the G-98 and placed an order of 180 Fighters and 20 Trainers.

The M-2 bombing computer was removed from the F-104J in response to Japan's demand for an sole-interceptor, and it was armed with a JM61 Vulcan cannon and AIM-9B/E/P Sidewinder air-to-air missiles. The Vulcan cannon was not initially planned to be equipped, and 180 contracted aircraft have been manufactured unequipped. Later, a Vulcan gun was installed, but of the 210 F-104Js in total, only around 160 were equipped. The muzzle of the unequipped aircraft was blocked, and there was a spare fuel tank in the empty space instead.

Twenty two of the Japanese F-104s were eventually converted to UF-104J radio-controlled target drones and destroyed for aerial target practice.

A total of 210 F-104J air-superiority fighters and 20 dual-control trainer F-104DJs were built, three by Lockheed, 29 by Mitsubishi from Lockheed-sourced components, and 178 by Mitsubishi. After being retired and replaced by F-15J's in Japan, the US sold 31 F-104J and 5 F-104DJ aircraft to the air force of Taiwan. 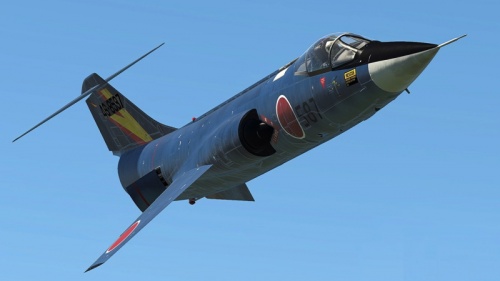