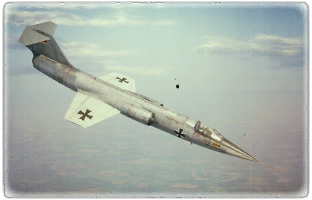 The F-104G has great speed, acceleration, and climb rate due to its streamlined aerodynamics and powerful engine, the General Electric J79-GE-11; which gives thrust of 4130 hp without and 6360 hp with afterburner. This is achieved at the cost of low-speed handling and turning capabilities. It only turns acceptably at transsonic or supersonic speeds (around 1,000 km/h), anything below that being far below average for a jet fighter. Even then, do not try to turnfight with anything other than fellow Starfighters; even a F-4E will outturn you. The stubby wings with a low aspect ratio also contribute to poor manoeuvring energy retention, so extended turning will bleed energy quickly. The roll rate is good, which helps in defensive manoeuvres. The already bad turn rate becomes worse the higher you fly.

The F-104G has no armour; be it in the form of armour plates or armoured glass. Fuel tanks are self-sealing, which is pretty much a standard feature at this rank. The F-104G also has access to countermeasures as tier I modification (unlike Chinese F-104G) and Radar Warning Receiver as tier IV modification.

While selecting which combination of countermeasures to use, the pilot should consider which missiles are his opponents going to use. Most common missiles on this rank are IR tracking, which are countered by flares. Less common types of missiles are semi-active radar homing, SAHR (like AIM-7E); those are countered by chaff. Radar guided missiles are usually used on longer distances, but they are often dud and can be outmaneuvered, even in F-104; while IR missiles are launched from closer range and can pull more Gs than F-104s.

If you fly with the afterburner while launching flares, missiles are gonna ignore them and go straight for you.

The F-104G's engine performance is sufficient when stock, so one should go for countermeasures first. Most enemies engage with IR missiles and the F-104G simply does not have enough manoeuvrability to outturn modern ones like R-60 and AIM-9J Sidewinder. Unlock AIM-9B missiles next, they are bad compared to competition, but they are better than nothing. Then go straight for the RWR. AIM-9B FGW.2 Sidewinder can be left for last, since they are bait-and-switch, they should have better tracking but their flight characteristics is identical to the AIM-9Bs at tier II.

The F-104G should not be used in turn fighting engagements as its small wingspan and wing area does not allow the Starfighter to outturn or retain enough energy to fight any other aircraft. Instead, the Starfight should use its high speed and engine performance to outrun most opponents. When at top speeds, the Starfight is able to outrun short-range AAMs launched from 2.4 km at sea level and 3.5 km at higher altitudes. Flares are also available to the Starfighter which proves to be incredibly useful to pre-flare or to dodge missiles which your aircraft wouldn't normally be able to dodge without flares.

Aggressive flanking and forcing enemies to turn and dump their energy is the playstyle which all Starfighter's should be flown and the more powerful engine of the F-104G variants compared to the A's and C's allow this playstyle to be played more successfully, though you cannot outrun some fighters such as the MiG-21bis (though your wing rip speed is much higher) and the F-104S (Having a much more powerful engine though much heavier).

Do not bother with climbing in uptier: your already bad manoeuvrability gets worse the higher you get, and without RWR and Chaff you are nothing more than practice target for F-4Es with SAHR missiles. Instead, start side climbing to 2 to 3 km, then flank already engaged targets. Your speed allows you to close distance quickly and your missiles are good enough to engage distracted enemies flying in a straight line or in low energy state. Then, escape using your superior speed. Rearm, rinse and repeat.

If you get downtiered, there are few enemies that can match your speed and climb rate. Stick to boom-and-zoom tactics, watch out for other Starfighters, Harriers, Yak-38 and Hunters and use your flares to evade their missiles. Since few planes (or any at all) around BR 9.0 have RWR or flares, they should be easy prey for your Sidewinders.