Difference between revisions of "Etendard IVM"

The Etendard IVM is armed with:

at the end of 1953, Drawing lessons from the Korean War (1950-1953), the Air Force staff and the official services, concerned with the increase in weight and aircraft prices, write specifications for a light interceptor.

the Air Force staff requests a light tactical support plane and armed fighter aircraft specially designed to operate in the vicinity of the line of fire and, in principle, at low altitude. This aircraft must be able to carry out a dual mission: to carry out ground attacks and to fight to ensure air superiority although aerial combat remains a secondary mission and, for safety reasons, to be twin-engine. The French Navy, for its part, wants to have a similar aircraft that can be loaded on its aircraft carriers.

In 1955, the Technical Service of Aeronautics asked Dassault to study the embarkation of the Mystère XXIV (Étendard IV), to make it an "on-board assault and low-altitude fighter aircraft". The Étendard IV M on-board prototype is an attack and fighter aircraft at low and medium altitudes, usable from aircraft carriers of the Clemenceau class, equipped with the Snecma Atar 8 reactor with 4,400 kg of thrust. 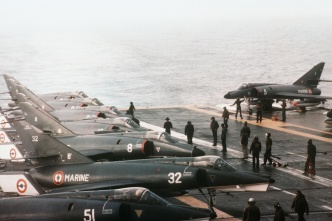 The first Étendard IV M flies on May 21, 1958, in Melun-Villaroche, in the hands of Jean-Marie Saget. Five pre-series aircraft are produced. The performance and carrying capacity of external loads make the Étendard IV M an excellent assault aircraft, usable in secondary missions for interception and air combat, characteristics imposed by the French Navy. This order of 90 planes including 30 in photographic recognition version, Étendard IV P.

Ordered in September 1959, the prototype n ° 07 which became Étendard IV P made its first flight on November 19, 1960. This version carries five OMERA cameras in the nose of the fuselage while the belly compartment can also be equipped with long focal length cameras instead of cannons. It has a non-retractable in-flight refueling pole.

in his life, the Etendard was engaged :

- In the former Yugoslavia from 1993 : On April 15, 1994, the Étendard IVP n °115, on a reconnaissance mission, was hit by a surface-to-air missile in Bosnia and Herzegovina over Gorazde. Without elevator, riddled with impacts, Lieutenant-Commander Pierre Clary achieves a piloting feat and, with the help of his teammate, he brings the plane back on board the Clemenceau after a deck-landing at a speed higher than normal. A television crew present on the aircraft carrier immortalizes the landing. The plane was repaired in the Cuers workshops and resumed flight a month and a half later ;