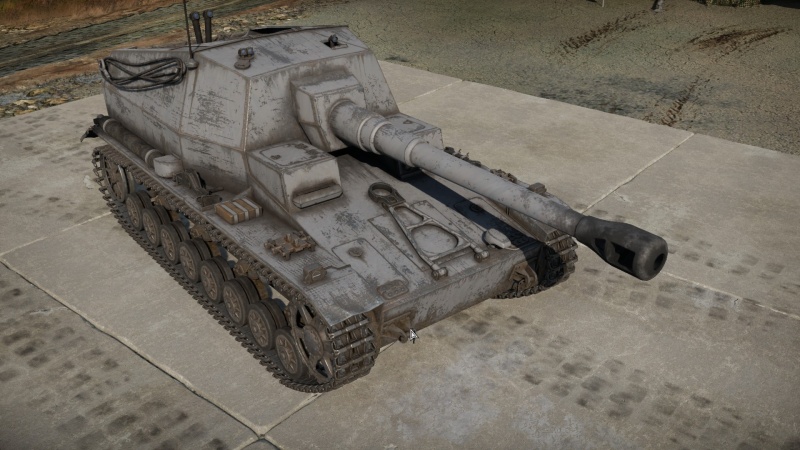 The Dicker Max is a open-topped SPG with a 105 mm (10.5 cm), based on the Pz.IV E chassis. The 10.5 cm artillery gun is not only more effective than the StuH's 10.5 cm howitzer, but it is very consistent in terms of the results: hits that usually devastate the enemy. Its 14 second reload is not bad either, for a gun of its size, 4 seconds faster than the StuH, and over twice as fast as the KV-2's. The 105 mm HE round can also be effective on many lightly armoured vehicles like the M18 Hellcat. 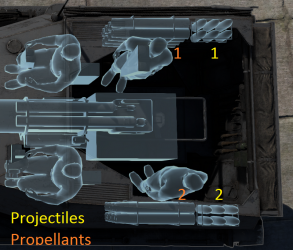 Ammo racks of the "Dicker Max".

With only 50 mm of armour at a battle rating of 4.3, the Dicker Max can be defeated frontally by any vehicle of its rank, even at some range. It is particularly vulnerable to SPAAs with a high rate of fire (heavy machine guns can penetrate the rear, or shoot down into the cabin should the opportunity present itself) and large-caliber shells. Airplanes are also devastating, especially if they are full of guns. Artillery is also worth noting.

Trials with the two prototypes Krupp produced were done by Anti-tank Battalion 521. The battalion took the vehicles with them during Operation Barbarossa. One was destroyed due to catching fire and an ammunition explosion, but the other was able to last until the end of 1941.The sole vehicle also saw use in the German offensive Case Blue in Summer 1942, but it was not reported to be operational by the battalion afterwards. Opinion of the vehicle was that it was unsuitable for participation in a frontal assault due to its low armour and maneuverability. The gun was deemed effective in supporting an infantry assault and knocking out tanks, but the heavy muzzle blast caused large dust to obscure the gunner view, requiring an observer to watch where the shots land. No reports were made on engine and transmission problems, but there were issues with the brake system. Due to these issues, the Dicker Max did not see mass production for widespread usage. Thus, only the two prototypes were made before interest in the project dropped.