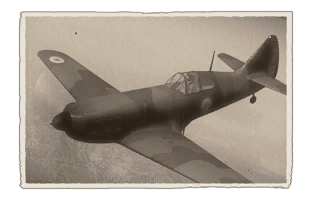 The ▄D.520 is a rank II gift British fighter with a battle rating of 3.0 (AB), 2.7 (RB), and 2.3 (SB). This aircraft has been in the game since the start of the Open Beta Test prior to Update 1.29. Unfortunately, this vehicle is currently unavailable to players who want to purchase it due to it being removed from shop.

The main purpose of the D.520 is the role of an interceptor/fighter. It has no bomb-capacity and thus stands limited to aerial combat. In this respect, there are a few things to consider, first and foremost that this is a fighter that does not do great away from a squad. It has mediocre flight characteristics as far as speed, climb and turn are concerned. It is however quite well armoured to compensate for such, meaning that it will stay air-worthy where other aircraft would crash, and instead stands a fighter which is effective in engagements where it has support to rely on. Without such support, it is a very situational plane which can engage certain enemies depending on advantage in altitude, speed, or sometimes even a turning radius. It has a respectable armament of one powerful Hispano 20 mm cannon with a very limited ammunition load (60 rounds), and four 7.5 mm guns with a good deal of ammunition which makes it competitive in realistic battles. Its strong airframe is able to withstand significant wind resistance making it potent in a longer dive. Despite its limited attributes, it handles fairly comfortably and thus can be a real asset to a pilot which employs situational awareness combined with an in-depth understanding of the enemy aircraft he will choose to either engage or avoid. It has a potent incendiary tracer round for its machine guns and the Hispano makes it pack a fairly significant punch despite its limited cannon ammunition. The D.520 is best considered a heavier single-seat fighter aircraft which can out-endure other enemy squads due to its armour, but not out-turn, out-run, out-gun many other types of aircraft on its own rank.

The Dewoitine D.520 was a French single-seat, all-metal, monoplane fighter which first entered service in 1940. In 1936 the French Armee de l’Air stated a requirement for a cannon armed fighter capable of speeds of 500 km/h. Emile Dewoitine began work on a design to meet this criteria and a prototype D.520-01 conducted its first test flight on October 2nd 1938. After some initial teething problems, the first production run was started in October 1939. In April 1940 the first D.520s were declared operational in Groupe de Chasse 1/3, a Groupe which already included a good number of combat experienced pilots.

The outbreak of war had made any further refinement of the aircraft impossible, and as a result production commenced with minimal delays, leaving no time for proposed improvements to be implemented. Instead, upgrades would be made during production, as time allowed. The production model had a redesigned carburettor air intake and a modified cooling system for the engine. Later D.520s featured jet exhaust pipes. The production model was sometimes referred to as the D.520S (""serial"") or the D.520C1 (""chausser 1"" - single-seat fighter).

The Dewoitine D.520 flew its first operational sorties in May 1940 and the majority of its victories (18 confirmed kills) were achieved by one of the leading French aces, Adjudant-Chief (then Sous-Lieutenant) Pierre Le Gloan from GC III/6. Production of the D.520 was halted when France surrendered in the summer of 1940 and then restarted under German occupation in April of 1941.

From September 1942, the D.520 was the main fighter of Vichy France; the puppet French government who now collaborated with Nazi Germany. From April 1941 onward D.520s took part in clashes with British forces in Lebanon and Syria. In November of 1942, some D.520s joined la France Libre and fought for the Allies in North Africa. The D.520 also served with the Luftwaffe, and the Germans supplied the fighters to their allies in Italy, Bulgaria, and Romania.

The Dewoitine D.520 is considered by many to be the best French fighter of World War II. Its initial competition included the Spitfire and the Messerschmitt 109, although its handling characteristics and performance were inferior to both. One senior British test pilot described it as underpowered, ‘a nasty little brute’ to fly and markedly inferior to both the Spitfire and Hurricane.

D.520 fighters were mass manufactured intermittently until June 1944 and in all 610 were produced. The last D.520s, used as trainers, were retired by the Armee de l’Air in September 1953.