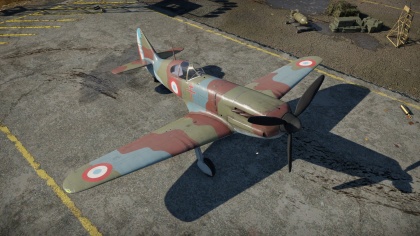 The main purpose of the D.520 is the role of an interceptor/fighter. It has no bomb-capacity and thus stands limited to aerial combat. In this respect there are a few things to consider, first and foremost that this is a fighter that does not do great away from a squad. It has mediocre flight characteristics as far as speed, climb and turn is concerned. It is however quite well armoured to compensate for such, meaning that it will stay air-worthy where other aircraft would crash, and instead stands a fighter which is effective in engagements where it has support to rely on. Without such support, it is a very situational plane which can engage certain enemies depending on advantage in altitude, speed, or sometimes even a turning radius. It has a respectable armament of one powerful Hispano 20 mm cannon with a very limited ammunition load (60 rounds), and four 7.5 mm guns with a good deal of ammunition which makes it competitive in realistic battles. Its strong airframe is able to withstand significant wind resistance making it potent in a longer dive. Despite its limited attributes it handles fairly comfortably and thus can be a real asset to a pilot which employs situational awareness combined with an in depth understanding of the enemy aircraft he will choose to either engage or avoid. It has a potent incendiary tracer round for its machine guns and the Hispano makes it pack a fairly significant punch despite its limited cannon ammunition. The D.520 is best considered a heavier single-seat fighter aircraft which can out-endure other enemy squads due to its armour, but not out-turn, out-run, out-gun many other types of aircraft on its own rank.