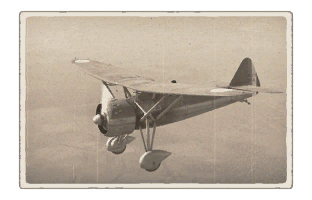 The D.371 is the first production aircraft of the D.37 series which is available as a reserve aircraft for all pilots starting in the French tech tree. The D.371 (along with its siblings D.371 H.S.9 and D.373) are unique compared to other reserve aircraft in the game as it is a mono-plane with a parasol wing as opposed to other low-wing mono-planes and biplanes. Key features of this aeroplane include 4 x MAC 1934 7.5 mm machine guns and wheel brakes. On the other hand, the D.371 also features an open cockpit and no armour protection like many early aircraft.

This aircraft is the first of the D.37 series featured in the game along with its younger sibling the D.373. As a single-engine monoplane, it is agile and quick and while it can be a formidable turn-fighter, maintaining speed in this aircraft is crucial, or else it becomes a slow easy target for other aircraft. The MAC 1934 machine guns are not that powerful, however having four of them will enable the pilot to sling quite a bit of lead at the target aircraft.

Due to the D.371 being a reserve aircraft, it is not uncommon for it to be pitted against higher rank I aircraft and even some lower rank II planes too. While slower than many of the higher aircraft it may face, not all is lost. The D.371 will have a manoeuvrability advantage, and if the pilot can pull the higher rank enemy into a turn-fight, the D.371 may be able to turn the tables and score a win. Don't count the D.371 out of the fight until the pilot bails out of the plane, if still flying, it can fight!

Early aircraft did not feature much in the way armoured protection as many of the aircraft were at this point were transitioning from the wood frame and cloth skin to the wood frame and metal skinned aircraft. Due to the balancing of the aircraft, much of the critical equipment was positioned towards the front of the aircraft, where the engine, fuel tanks, oil pumps, control linkages and the pilot were clustered around each other. With this tight grouping and no armour protection, when fired upon, chances are high to hit a critical component in the aircraft.

Each of the four machine guns is bundled into groups of two and mounted to the underside of the upper wing. Each machine gun is outfitted with the same amount of ammunition, which means that all weapons will fire with each other until empty. Due to the mounting locations on the wings (outside of the propeller arc) and the calibre of the machine guns, convergence in this aircraft is essential. Most of the fighting with this aircraft will be in close quarters to exploit the power of the machine guns in close. Convergence set between 150 and 300 meters (wherever you are most comfortable) will work best to put the most bullets into the enemy aircraft as possible and hit a critical component. Many pilots in World War I and II would set their weapon's convergence to 200 to 250 meters and would wait until being in that range before firing to ensure the best chances for shooting down the enemy. Shots from too far away could "spook" the enemy into evasive manoeuvres or just waste ammunition in a "spray and pray" manoeuvre. Practice and skill will allow the pilot to close within 250 m of the enemy and take them out with controlled bursts, filling the enemy with holes and potentially hit a critical target such as the engine, oil cooler, fuel tanks, or the pilot, which would cripple the enemy to allow for moving onto the next victim.

Maintaining speed with this aircraft is a must as a slow D.371 is an easy target. Initial spawning into a map should lead a D.371 pilot to climb and gain altitude. Having an altitude advantage will set you up in a position of power over most other pilots upon reaching the combat area as you will select which enemy plane to dive on and attack. With a diving attack, you will gain speed which will allow you to quickly gain on the enemy aircraft fire off a burst of rounds and then climb back up for altitude. If you decide to tail an enemy plane after a dive, you will risk bleeding off your energy. When attacking an enemy plane, attempt to attack when you see the greatest surface area of the fuselage and wings. If tailing a fighter, wait for them to turn or pull-up to expose the most surface area. When turn fighting or looping, utilise your rudder to sharpen your turning ability.

Recommendation:
Upgrading the machine guns will unlock more ammunition options increasing the lethality of this aircraft. Focusing on engine and engine component upgrades will increase speed and climb rate giving you an advantage over slower or stock aircraft. Survivability upgrades will increase the toughness of your aircraft allowing it to absorb more damage before being critically damaged usually.