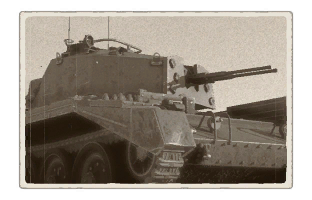 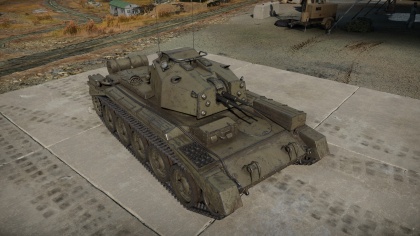 The Tank, Cruiser, Crusader III, AA Mk II is a rank III British self-propelled anti-aircraft gun with a battle rating of 3.7 (AB/RB/SB). It was introduced along with the entire British tree line in Update 1.55 "Royal Armour". 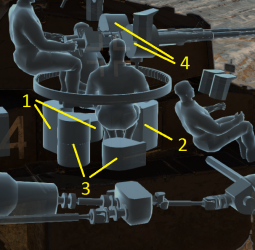 Though the Crusader AA Mk.II was meant for SPAA, the twin 20 mm cannons mean this vehicle can annihilate thin-skinned vehicles with ease, such as the 8.8cm Flak 37 or the M15, as the 20 mm will slice through the thin half-track armour to knock out the crew.

Prefered fighting locations
Due to the heavy ammunition consumption as SPAA in AA fights, stay at "safe" capture points to get free ammunition to reload during battle. If forced to return to a cap point early in the game, this will often be a death sentence.

Due to the closed nature of the vehicle, the Crusader AA Mk.II doesn't need to worry about strafing fighters as they will often not do any serious damage to the crew. However, ground attackers like the Ilyushin or Thunderbolt are still just as deadly. Though more protected from machine gun fire, its armour is not enough to stand against enemy tanks, which would slice through the armour with shots from their cannons.

In 1938, the General Staff of the British Army requested a cruiser tank that was lighter and more affordable than the heavier A16 cruiser design developed by Nuffield Mechanizations & Aero. One of these designs was the designation Tank, Cruiser Mk.V based off the A13 cruiser tanks, named the "Covenanter", and Nuffield was invited to become part of its development team, but they refused due to interest in developing their own cruiser tank. Their tank was designated the Tank, Cruiser Mk.VI Crusader and fell under the General Staff specification of A15. The Crusader was a parallel design to the Covenanter but was ready six weeks earlier than the Covenanter despite starting at a later time. The Crusader was adopted into service with the British Army in 1941 and the 5,300 units were manufactured between 1940 to 1943.

The Crusader Mk.I and Mk.II were equipped with the 2-pounder, which was aimed by the gunner inside with a padded shaft that allows them to elevate the gun by simply adjusting his own height. Later in the war where an up-gun of the tank armament was necessary and newer tanks such as the Cromwell was delayed, the Crusader was upgraded into the Crusader Mk III variant with a 6-pounder instead, which restricted turret space, requiring the turret crew to be reduced from three to two. These saw the first action the Second Battle of El Alamein in October 1942.

The AA tank Mark II replaced the obsolete Mark VI AA tanks that had been in the four-vehicle anti-aircraft troop in a British armoured regiment or infantry tank battalion, starting with the Normandy landings. The lack of German air targets meant they were largely used against ground targets. These regimental AA troops in France in 1944 used a mix of Crusader Mark IIs, Crusader AA Mk IIIs (which had a coaxial machine gun as well), and similarly armed Centaur AA tanks (based on an early version of the Cromwell that was also no longer useful as a battle tank).