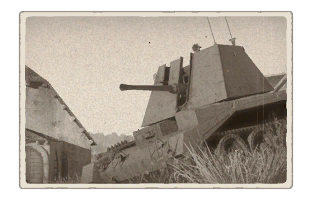 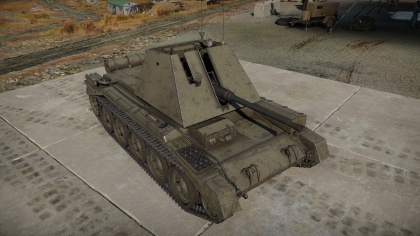 The Crusader AA Mk I is a rank IV British self-propelled anti-aircraft gun with a battle rating of 4.7 (AB) and 4.3 (RB/SB). It was released along with the entire British tree line in Update 1.55 "Royal Armour". Compared to the Mk.II variant, the Mk.I features a single 40 mm Bofors auto-cannon as its main armament. While it means a reduced rate of fire compared to the faster firing 20 mm Oerlikon auto-cannons, the 40 mm can cause devastating damage if it hits an aircraft.

In comparison to its predecessor and other 40 mm contemporaries like the American M19, the Crusader AA Mk.I unfortunately has some disadvantages. The single 40 mm cannon means that it cannot fire as fast as the 20 mm auto-cannons on the predecessor or have the fire density of the dual-cannons on the M19. Thus, accuracy is important to conserve what little ammo the SPAA can hold and to make sure that airplane gets hit.

The Crusader AA Mk.I is meant to be a SPAA, meaning it must stay away from the front lines or else it will easily be destroyed by the enemy. Instead, stay at least a good distance from the fighting and stay in cover, hopefully in an area where the gun has full 360° view of the whole sky to knock out any airplane attempting to strafe your allies. 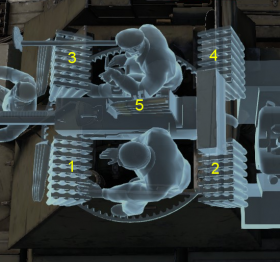 Ammo racks of the Crusader AA Mk I.

Despite being an SPAA vehicle, the Crusader struggles in an AA role. The gun is slow firing and fires at quite a low velocity, meaning that you will struggle to target fast moving enemy aircraft. Granted, a single hit will often spell doom for an enemy aircraft. Therefore, it is important to hide and wait for an opportune moment to open fire on an enemy aircraft. A low flying aircraft within 1km, flying at low speed, should be easier to hit. However, higher ranked and faster planes will can be a much harder target to his with the slow turret traverse for tracking and the slow fire rate of the gun.

The Crusader AA Mk.I can also serve in an anti tank role. With armour piercing rounds, the Crusader performs better than most SPAA in this role. With 76 mm of penetration, you can penetrate the frontal armour of light and some medium tanks and the side or rear armour of some heavy tanks. Poor post penetration damage means that you will need to target various sections of an enemy tank in order to destroy it. Some tanks will be almost invulnerable to your rounds, and while tanks KV-1 ZiS-5 can be dealt at point-blank range on the side or rear, there are many other heavy tanks that the 40 mm cannon will not penetrate.

The AA Tank Mk. 1 was issued to artillery light anti-aircraft regiments starting with the landing in Normandy, but the Mark I's were withdrawn from service soon after D-Day due to the Allied air supremacy and lack of Luftwaffe targets meaning significantly fewer anti-aircraft weapons ended up being required. 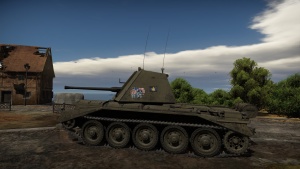 Crusader AA Mk I in Normandy