Crew Skills are the added attributes to the crew performance and effectiveness, being for the pilots, gunners of multi-crew aircraft, tanks, ships, and airfield/hangar/port mechanics.

Crew skills are War Thunder's way of simulating the experience and skill gained by air, ground, and naval crews through combat missions, allowing them to perform/endure tasks more efficiently and effectively as they increase in skill over time, such as how quickly aircraft are repaired by ground crew, how fast the tank's loader can fit shells into the gun breech, how accurate bombers' gunners' fire is, or the amount of g-force that can be sustained before a pilot begins blacking out.

During lulls in between matches in the hangar, pay attention to the bottom left corner of the crew slots, which have a numerical value representing the crew level. The colour of this text indicates crew XP point accumulation: a regular silver font showing regular crew XP point amount, and a glowing gold font showing a large amount of unused crew XP points.

These two skills do not affect in-game combat, but rather allow you to repair your vehicles for free over time, if you uncheck "automatic repair" on the right of your line-up bar. This function is mostly used by players who play many nations at once and don't mind a small wait in order to save some precious Silver Lions

Unlike skills, qualification levels (beyond "Basic" - the training achieved by spending crew points) are acquired only for a named vehicle. Qualification is an exceptional skill of the crew in controlling this particular vehicle. To learn it, a certain crew level needs to be achieved. Crew level is the sum of the levels of all skills learned by the crew.

Spending crew points, in aircraft crews, accounts for 50% of the attainable skill levels. There are three levels of qualification altogether before one can reach the full 100% of the crew: "Basic", "Expert" and "Ace". 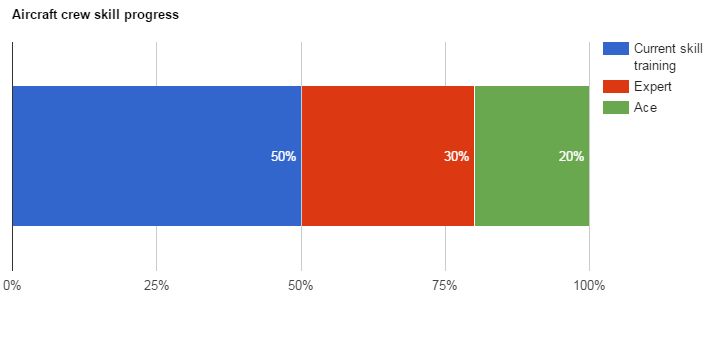 In order to use these skills at their maximum level, a pilot needs to research them up to level 5 and obtain two qualifications to reach up to level 10. For instance, a pilot who levelled the "Keen Vision" skill up to 5 will detect targets approximately 6 km away; after getting the "Expert" qualification he will then see enemy targets at 7.2 km; finally, reaching "Ace" grade qualification will increase this detection distance to the maximum of 8 km. 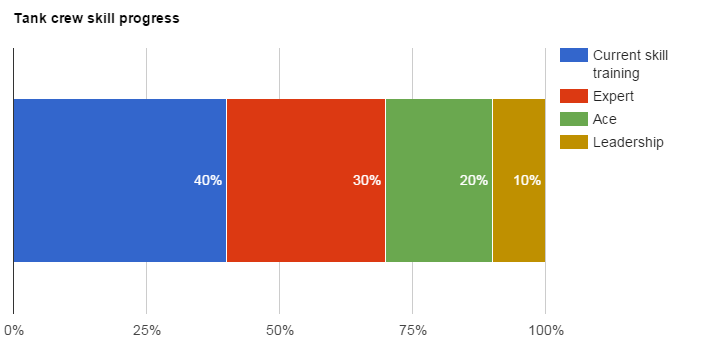 The maximum achievable crew level for aviation crews is 75, for tank crews is 150, and for naval crews is 100.

Highlighted colour skills - the unique skills of a crew member