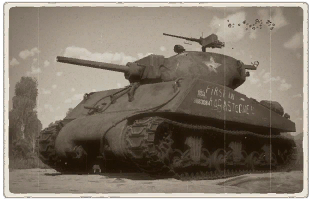 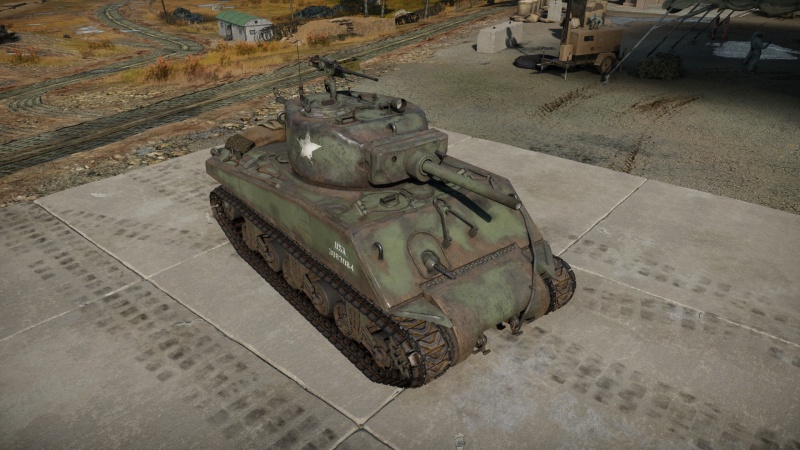 The Assault Tank M4A3E2 Jumbo "Cobra King" is a premium rank III American heavy tank with a battle rating of 5.3 (AB/RB/SB). It was one of the first American tanks to be released with the American ground tree in Update 1.45 "Steel Generals". A premium version of the M4A3E2 Jumbo. As a side note, the nickname "Jumbo" was likely never used during WWII, as there is no record of it. However, its use both on the Wiki and in-game is still prevalent.

The "Cobra King" is in many aspects the same vehicle as the regular M4A3E2. There are however a few notable cosmetic differences:

The Jumbo's armour is nothing to underestimate. It can bounce most shells at point blank range when angled more than 30 degrees. And the turret is well armoured from all sides, too. This tank is used as a breakthrough tank to attack fortified enemy positions due to its thick armour. As such it allows players to get close to most enemy tanks and attack them from the sides, or force them to retreat. On the downside, the gun is wimpy without M61 shot and even then it still bounces more often than not. Best to take a bit more ammo than normal to compensate for all the shots that will bounce.

The "Cobra King" still features the double layered front armour giving the vehicle its distinctive 101.6 mm total front armour. The transmission housing is also considerably beefier too from the addition of armour at the area as well. The front of the T23-style turret is also distinctive with the very blocky gun mantlet and circular barrel shroud around the rather underwhelming 75 mm gun barrel.

The sides and suspension look like the usual game with the M4 Sherman series, but with minor differences. The flat side armour of the hull, instead of 38.1 mm thick is now 76.2 mm thick for much stronger side protection. However, the lower side hull around the bogie suspension area is still only 38.1 mm thick, vulnerable to most regular anti-tank weapons. Another minor difference is the tracks, the T48 rubber chevron tracks are equipped with extended end connectors in an effort to improve ground pressure performance for the additional weight of the armour.

If a frontal engagement is unavoidable and is unfortunately armed with guns unable to penetrate through the front glacis, there are only two areas that are viable. First is the machine gun port, which is one of the areas that is not layered with the extra 38.1 mm added on top of the base armour. Guns like the Panzer IV 75 mm KwK 40 guns that are unable to cleave through the front glacis can push their luck in this area, with small "sweet spots" the round can pass through. Another way to attack the M4A3E2 in this scenario is exploiting a shot-trap in the gun mantlet. The small corner flaps on the bottom corners of the gun mantlet have a tendency to deflect rounds downwards onto the 19.5 mm hull roof armour. While this will be left to the ricochet chances, it is still possible and can be used if no other scenarios are favourable. 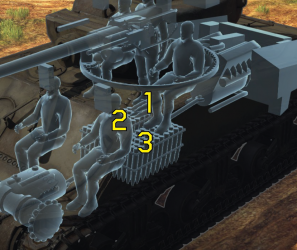 The Cobra King is best in assaulting enemy positions with allies. Its great mobility for a heavy tank, especially with its armour, makes it a vehicle able to charge into battle with confidence. It can act as a bullet magnet against enemy tanks more worried about the Cobra King, diverting fire that would have been directed more vulnerable teammates. Though the 75 mm gun's AP performance is not suited to the type of enemies expected at the BR, it can still harass enemies and the gun is lethal enough that enemies will be forced to show their front armour towards the Jumbo else a 75 mm penetrates their side armour. Their focus on the Jumbo can allow allies to move around and eliminate them. During all this, take care not to over-angle and show the lower side armour too much as this will allow vehicles to penetrate through down there and damage modules, even the ammunition storage if they are lucky.

Another role the Cobra King is good at is as a flanker. Due to its great mobility as a heavy tank, the Cobra King can manoeuvre like a medium tank around the battlefield. This is also beneficial to the 75 mm gun as it would permit the Cobra King a chance to attack the weaker side armours of enemy vehicles. Once flanking around and finding a prime position in a firing angle right into an enemy chokepoint, minimize exposure to anything but the front armour and the Cobra King can remain a formidable obstacle to all opponents. Take care not to be outflanked by enemy players aware of the Cobra King's position.

As the Cobra King has a slightly higher battle rating than the other M4 Shermans, it can be up-tiered against tanks such as the Tiger H1 and the Panther D, meaning its M61 round will be almost harmless. For this reason, it is advisable to take the T45 APCR ammo into battle, at least enough to take on the armoured targets the Cobra King will face.

The Soviet 85 mm can be a threat, so caution is advised when going up against tanks armed with the 85 mm, such as the T-34-85, SU-85, and IS-1. The Jagdpanzer 38(t) and Jagdpanzer IV can be tricky when facing off against them. Their frontal armour is too thick and sloped for the 75 mm M3 gun to have any effect on it. For these two targets, it is advised to target their tracks and transmission and then flank for a side shot, where the armour is much weaker. Finally, the Sturer Emil wields a 128 mm that can penetrate the front plate of the Cobra King, so caution is advised against those as well.

Even before the invasion of Normandy, the Allied commanders had to figure out a method in order to breach heavily-defended fortification lines such as the Siegfried Line blocking the path from France to Germany. One of the solutions was the implementation of "assault tanks" that would enter enemy territory and root out the enemy fortifications. The initial plan was for the production of the M26 Pershing tanks to fulfil this role, but setbacks in its development caused the M26 deployment to be delayed until 1945. A quick solution had to be made to fill this "assault tank" role for the invasion of Europe in 1944.

The US Ordnance Department then took their abundant M4 Shermans in stock and fixed them up for the new role they've been assigned. Although keeping the same engine, the armour was upped from around 76.2 mm initial thickness to 102 mm and angled at 47 degrees from vertical. This angle would influence later Sherman designs such as the M4A3 by changing the original 56 degrees angled glacis with protruding crew hatches to 47 degrees angled glacis without any protrusion from the crew hatches. This modified M4 Sherman's armour when angled would then be 150 mm line-of-sight (LOS) thick and 180 mm effective. The side armour was also increased to 76.2 mm thick and the turret was redesigned to provide more protection. These modified Shermans were designated as the M4A3E2 by the Ordnance Department, whereas the nickname "Jumbo" was likely a post-war invention. At the end of the modifications, the Sherman "Jumbo" now weighed about 42 tons and moved at a lower speed of 22 miles per hour. A drawback to the increased weight of the Sherman is that the Vertical Volute Suspension System (VVSS) from the Sherman was unable to take the weight easily, so extra care was taken by the crew members to not break the suspension.

In March of 1944, the US Army ordered 254 of these vehicles to be delivered for use in European Operations. Intended to assault the Normandy Beachhead, it was deployed in Normandy after D-Day to assist the infantry push through German defences. The M4A3E2 originally came with the 75 mm cannon to support infantry with its better HE shells compared to the planned 76 mm instalment, but the 76 mm was installed later in the campaign and called the M4A3E2 (76) W Jumbo.

The M4A3E2s was well-liked by the crew and commanders due to its protection value. Despite the weight difference and strain on the suspension, it performed reliably and could absorb damage that would otherwise destroy regular Shermans. Later in the war, when the quantity of the M4 Sherman "Jumbos" were unable to meet the demand, George S. Patton ordered the existing M4 Shermans to weld on armour plates scavenged from knocked out tanks to makeshift "on-the-field" Jumbos. This caused the newer Shermans such as the M4A3 (76) W HVSS to have the same protection by welding metal onto the hull. One of the Jumbo's notable participation in the war was in Patton's Third Army where it spearheaded the assault of Bastogne to relieve the pinned down 101st Paratroopers. The M4A3E2 "Cobra King" was the tank Lt Charles P. Boggess commanded to lead elements of Patton's Third Army into Bastogne on December 25, 1944. The 101st was finally relieved and reconnected with the Third Army on December 27. "Cobra King", however, was knocked out sometime during the fighting (maybe during the Hammelburg Raid) and had its interior destroyed by an internal fire. When the tank's remnants were identified in 2008, it was shipped back to the United States to Fort Knox at the Patton museum to be restored by Len Dyer, director of the Patton Museum and the soon-to-be National Armor and Cavalry Museum. After two years of restoration work, the tank was put into the display at Fort Benning as a dedication to the Charlie Company of the 4th Armored Division's 37th Tank Battalion. It was moved in August 2017 to the future National Museum of the United States Army at Fort Belvoir, Virginia.[1]

When the war in the European Theater ended, the M4A3E2s were then placed stateside for the preparation for the invasion of the Japanese Home Islands. However, this was never to be fulfilled as Japan surrendered to the United States in September 1945. The M4A3E2 Shermans proved to be a very effective stop-gap solution until heavier armoured tanks such as the Pershing could come into play. In 1948, about 96 Sherman Jumbos still remained in US inventory.

Other M4A3E2 vehicles in the game

News article about the tank