Difference between revisions of "Chieftain Mk 10" 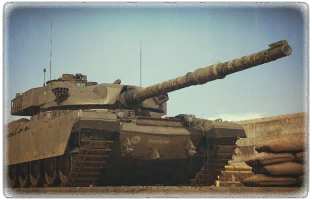 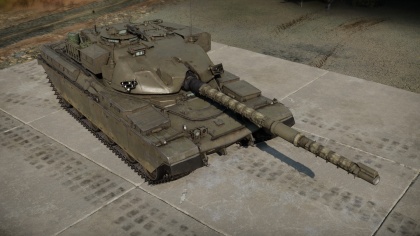 Armour is identical to the earlier Chieftain variants, but with the addition of Stillbrew composite armour over the turret front and turret ring. Stillbrew covers a majority of a hull-down Chieftain's frontal projection, but certain areas are not covered. Weak points include the area directly around the gun breach and a sliver of the turret ring between the hull and turret composite packages.

Due to the very thick, highly angled armour package, Stillbrew-protected areas are very resistant to KE projectiles up until top-tier long rod APFSDS (e.g. DM33, 3BM42, etc.). The simple composition of Stillbrew means it isn't as efficient against chemical shell threats, but it retains a somewhat respectable chemical shell protection of around 500 mm.

The Chieftain Mk 10 has a similar play style to the earlier marks but gains much-needed additional turret armour. This allows the player to maintain a much stronger hull-down position, as Chieftain turrets without Stillbrew can be penetrated very easily at this rank. The added L23 APFSDS round helps with engaging stronger armour at longer distances as well. These factors make the Mk 10 a "super Chieftain" of sorts; it retains its weaknesses (a weak hull and low mobility) and doubles down on its strengths (a heavily-armoured turret and powerful gun).

A player should seek to avoid brawling and instead entrench themselves in a hull-down, supportive position for the team.

As the FV4201 finalized its prototype stages, General Staff sent a revised specification for it. The tank was to have the firepower of the Conqueror with the mobility of the Centurion, an armour that maximizes the protection-weight ratio, a weight limit at 45 ton with a top speed of 26 mph and an operating range of 300 miles. The first wooden prototype was made in March 1959, with full prototypes ordered in June 1959 for troop trials. Vickers-Armstrong and Royal Ordnance Factory shared the manufacturing process and the first prototypes were built in January 1960. The first two prototype FV4201 was trialled in Germany alongside their new Leopard 1. The greatest issue with the FV4201 was the engine, which caused many failures due to vibration, a result of the flawed multi-fuel concept. Trials were delayed due to lack of parts to fix broken pieces and redesigns were requested to fix problems. After a lengthy trial period in 1962, the FV4201, now named the Chieftain, was sent to the operational unit in Germany for service and combat trials. The Chieftain was finally accepted for service in 1st May 1963, despite the many faults in the design. The first deliveries of the improved and redesigned Chieftains began in mid-1965. These were the Chieftain Mk 1's, which further revealed problems with the horsepower that the Mk 2 was designed and sent in April 1966. The Chieftain Mk 3 rolled out of the production lines in September 1969, it now weighed 53 tons and the L60 engine was producing 650 hp, still underpowered for the weight. Engine failures were still frequent and left the Chieftain with a sour note until the Mk 5 variant fixed these pressing issues with a new engine and NBC protection. The Mk 5 would be the main variant of the Chieftain in British service. During its production life from 1965 to 1985, a total of 2,265 Chieftains would be built by Britain, with about 1,000 used by the British Army.[1]

The first British units to receive the Chieftains was the 1st and 5th Royal Tank Regiments back during the trials. The Chieftain, despite its initial engine flaws, proved to be combat-proof and could be upgraded to fit new requirements. Some of these upgrades were the addition of composite add-on armour to fight off new anti-tank technology such as the HEAT rounds. The Chieftain earned the title "most formidable tank in the world" during the 1960's Cold War period and also redefined the specifications of a "main battle tank". Its success is due to its novel main gun and heavily sloped armour, as well as satisfactory mobility and speeds able to compete with the Leopard 1. The Chieftain stayed in use by the British Army On the Rhine on the German border with the Warsaw Pact, which caused the Soviets to in turn station their best tanks such as their T-64's against the Chieftains. The British retained the Chieftains all the way until 1997, when it was replaced by the Challenger II, initially being used in addition to Challenger I.

The Chieftain helped revolutionize tank design with its innovative features. The most important was the reclining driver seat, which allowed the tank to have a lower profile as the driver was now that highest part of the hull in tank design. It also had the most powerful NATO tank armament in service until the advent of the German Rheinmetall 120 mm, which came about two decades later. Chieftain can be considered the definitive main battle tank of the 1960s and help transition the path between second-generation main battle tanks and the third.