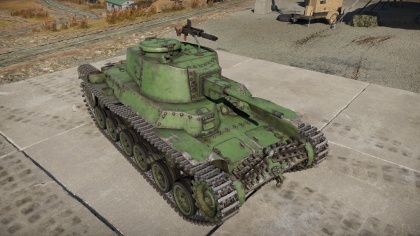 The Chi-Ha Kai (Kai means "improved) is an upgrade of the Chi-Ha that replaces the low velocity 57mm gun with the very good 47mm Type 1 tank gun, and adds 1 more crew to make a total of 5 with 3 in the turret. Compared to other rank 1 vehicles this gun is powerful and very good.

The 5th crewman, in a 3 man turret, improves survivability accordingly. However it is still a lightly armoured vehicle with only moderate mobility, so the tactics used with the Chi-Ha - stay close to teammates and always play sneaky - remain important.

The Engine provides adequate power - the power-weight ratio is comparable with other tanks of the late 1930's - but this tank was built from 1942 onwards so it is low compared to contemporary designs.

The new Type 97 Chi-Ha Kai first saw use in the Philippines campaign, where the complaint first arose of the inadequacy of the Japanese tank armament. Five were used in the Matsuoka Detachment during the Corregidor landing on 5 May 1942. These tanks helped surmount American defenses, which were inadequate in dealing with tank assaults. This eventually led to the Japanese victory in the Philippines on May 6. After these conquests, Japanese doctrinal changes from an offensive standpoint to a defensive one led to a shift in priorities. The defense of Imperial Japan's new territorial gain required a large navy and airforce to provide support in a large distance. The tanks, seen as an offensive type of weapon, were deemed unnecessary in the priorities attached with the industry. Combined with the rejection of any notion of hostility towards the Soviet Union, which would require a large tank forces, led to a drop in tank production from priority A1 to a flat D. While tank development continued to progress for improved tanks, this led to the Type 97 Chi-Ha Kai to be the best tank Japan could field out to their garrison stationed in China and the Pacific islands, meaning this was all they had against the incoming American, Commonwealth, and Chinese ground forces.[1]

Regardless, the Type 97 Chi-Ha Kai trucked onwards in the IJA. In the 1942 campaign in the Southwest Pacific, the islands were mainly forested and hilly so it produced an unsuitable environment for tanks. A dozen were used at Guadalcanal as part of the Sumiyoshi Force landing in October as the 1st Independent Tank Company. These tanks helped the Japanese attack the Matanika River, but the Chi-Ha Kais were simply knocked out by 37 mm anti-tank gun the U.S. Marines brought in, leading to an end to armoured operations. The tank force saw more usage in the Central Pacific islands, but in these stages at 1943 and 1944, they faced against superior M4 Sherman fielded by America. With the increasing vulnerability of Japanese tanks to American anti-tank capabilities, commanders often resort to keeping the tanks in entrenched and fixed locations to reduce their exposure and hopefully catch an enemy medium tank by the sides, which the 47 mm can penetrate.[2]

The Type 97 Chi-Ha Kai would see more usage in the Battle of Guam and Saipan when tanks from the 9th Tank Regiment were sent to defend these two vitally important islands. As the Type 97 Chi-Ha Kais were the only tanks able to reasonably defeat the M4 Shermans, it was a substantial upgrade in the Japanese defenses in comparison to its previous battles. The Americans invaded Saipan in 15 June 1944 along with two tank battalions consisting of M4A2 Shermans and flamethrower-equipped M3A1 Stuarts. Another weapon to add to the U.S. invasion arsenal was the bazooka, which now presented any U.S. infantry formation with the power to destroy even the heaviest armoured Japanese tank. In the first three days of the Battle of Saipan, the armoured forces were thrown against the American beachhead forces. The first two days had small sporadic units attack the American beachheads, all were annihilated by American bazookas and tank guns. On the night of June 16-17, the entire 9th Tank Regiment's forces of 44 tanks attacked the American lines. Illuminated by navy light flares, all the Japanese tanks in the one of the largest Japanese tank attack of the Pacific war were subsequently destroyed by 37 mm anti-tank guns, M4 Sherman's 75 mm guns, and 60 mm Bazookas. Only a dozen of the tanks committed survived that encounter, but these would only fall victims to the Marine's tanks later in the campaign. These same events happened in Guam, which also had the Chi-Ha Kais of the 9th Tank Regiment, and further showed the technological disparity between the two nations.[2]

A relatively more successful usage of the Japanese tanks was during the Battle for the Philippines that took place from 1944 to 1945. The Japanese employed the 2nd Armoured Division on Luzon while the Americans fielded up to 500 armoured fighting vehicles in 10 different battalions. While outnumbered, a change in battle strategy gave the Japanese armoured forces a fighting chance. The Japanese recognition of the weakness in the Japanese's armour led to many commanders hiding their tanks in dense foliage, awaiting for American tanks to come by to nail them in their side armour. Though the battle was still lost, the entrenchment of the tanks in static positions and the strategy of ambushing incoming Allied armour allowed the Japanese tanks to dish out more damage on the Americans than had they charge into the fray like in Saipan. The strangest use of the tanks in this campaign, and perhaps as a show of Japanese desperation, was the use of explosives on five tanks used in a "kamikaze" fashion to ram Sherman tanks before exploding; this strategy took out two Sherman tanks.[1]

By the last years of the war, Japanese armour hopelessly obsolete. Iwo Jima had only a portion of the 26th Tank Regiment with a few Chi-Ha tanks in pillbox formats. Okinawa had 13 Ha-Gos and 14 Chi-Ha Kais facing against 800 Allied tanks. The Burma Campaign that lasted from 1943 to 1945 had the 14th Tank Regiment with Chi-Ha Kais annihilated by British and Indian forces with Shermans and M3 Lees, a show of how obsolete tanks of the European theater can be superior to even the best Japanese tanks. Perhaps the final blow to Japan's armour was in Manchuria when the Soviet Union invaded in August 1945. The Soviets, whose standard tanks were now the T-34-85 and the IS-2, fielded up to 5,000 armoured vehicles against Japan's 1st and 9th Tank Brigade. The final Japanese tank battle came in August 18, three days after Japan's surrender with the United States, when Soviet forces landed at Shimushu Island. The 11th Tank Regiment, even with the knowledge of their country's surrender, attacked the Soviet forces under the rights of "self-defense if attacked" with 39 Type 97s and 25 Type 95s. The fighting between the Japanese armour and Soviet forces happened until August 20, when a cease-fire is placed.[2]