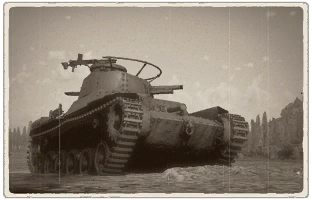 The Type 97 Chi-Ha is an upgraded version of the earlier Type 89 I-Go. The engine has been upgraded, from the Mitsubishi A6120VD air-cooled straight-six diesel with 120 hp to a Mitshubishi SA12200VD air-cooled V12 diesel with 170 hp. As such, the top speed has increased from 27 kph on the I-Go to 38 kph on the Chi-Ha. The armament stays the same, with the same shells and gun characteristics. The 5.7 cm Tank Gun Type 97 is robust, but will get the job done. It still has four crewmen inside, no armour, and a 7.7 mm Type 97 in the hull. Overall, it's in general a better I-Go.

Having a bigger engine means that it's much more maneuverable. Especially with the increased top speed. Acceleration stays about the same. Ammo racks for the Chi-Ha.

The Chi-Ha is the most interesting tank to play in Rank I Japanese tanks as it has little to no armour, a shot-put like a muzzle velocity and looks like a bus in some sense as to how long it is. But there is a way to play this tank despite all the negatives to this tank and to play it to the best of its abilities, one can play it as a support tank in every way (apart from long distance as the rounds drop like a brick after 500m). Stay close to teammates and always play sneaky as the Chi-Ha can be easily one-shotted by everything like all Japanese tanks in this Rank.

But if facing a heavy tank or medium tank of early Rank 2 are very hard to verse from head-on and the fact that the 57 mm APHE rounds lack penetration to destroy it from the front. So the best option is to go up behind it or attack from the side to destroy them. Another problem that shows itself strongly in close quarter fights is that the Chi-Ha has a hand-cranked turret and turning the tank is painful at best. So it is best to plan ahead before attacking, think where the enemy may be and find a place to hide the bulky tank from the enemy and wait for the enemy to come to the firing range. The Type 3 HEAT shell changes this. With 55mm of penetration, the tank is capable of penetrating tanks that it previously couldn't - which is most tanks at rank I and II. Use the protection analysis feature to figure out which tanks you can and can't get through, and adapt your playstyle accordingly when those vehicles are encountered. Now, this is somewhat important "Don't look for the enemy, let the enemy look for the Chi-Ha." Of course, the Chi-Ha could still go look for the enemy, but always be on alert and make sure to have a friend for firing support.