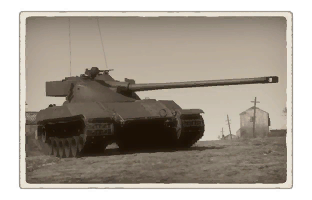 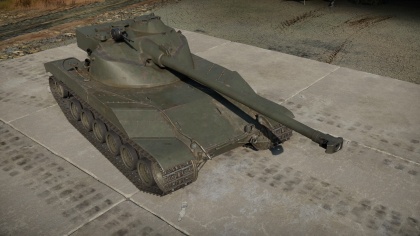 The Batignolles-Chatillon Char de 25 tonnes (shortened as Char 25t) is a Rank IV French light tank with a battle rating of 6.7 (AB/RB/SB). It was introduced in Update 1.81 "The Valkyries".

The Char 25t has more armour than its French cousins, at steeper angles. With distance, it may be able to bounce the 40 mm Bofors, though it will be rare. The top of the tank is well armoured and will easily defeat .50 cal (12.7 mm) rounds from airborne enemies though anything bigger will go through. The sides and rear are nonexistent comparatively and anything "antitank" will go through with ease. Most APHE shells fired at thinner parts of the tank may fail to detonate inside, it may save your life once or twice but don't rely on it. The driver has a 50 mm plate in front of him so that will help once or twice.

The Char 25t is very fast, both in top speed (even in reverse) and acceleration. With a top speed of 65 km/hr and great hp/ton, the Char will take you anywhere you want to go. The wide tracks compared to its low weight are just another cherry on top. The transmission has 12 gears, 6 forward and 6 backward, and then a neutral. The reverse gears are identical to the forward gears, so driving in reverse is no problem (except for the more exposed crew). Also, the Char 25t can neutral steer quickly.

The gun is decent for its BR and role. Although it lacks a HEAT-FS shell like its nearby cousin the AMX-13-90, it still boasts the 90 mm SA45 cannon used on the AMX-M4 with the same ammunition. It carries "only" APC, which can easily take out multiple crew if aimed correctly, though can be a tough one to master if new to solid shot. The HE shell is mostly useless though it can be useful if used against really light vehicles. 1 kg of TNT isn't nothing to scoff at.

The reload rate is phenomenal, 6.7 seconds between shots (even with a knocked out loader)! It carries 7 shots in the drum, like the AMX-M4, allowing for a sustained fire at multiple enemies. Make your shots count though! The solid shot will not be very forgiving to players who spam at empty space within enemies. 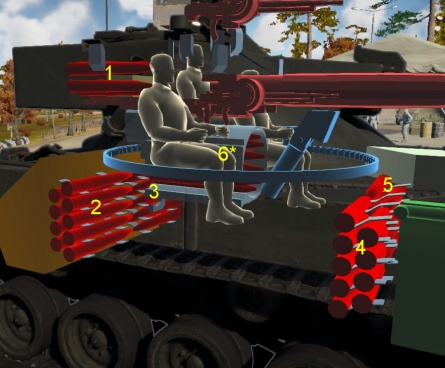 The Char 25t is a very fast flanking tank that can take on multiple foes if it has to. Engaging other tanks frontally is not advised as the main shell has a maximum pen of 193 mm, and even then there is no explosive filler, so hitting obscure weakpoints may not even disable heavier tanks. Against lighter tanks, be sure to avoid relying on armour as it only protects from some autocannon fire.

Long range sniper/flanker: Start off the match by heading for one of the flanks. If it's an open map, hide behind hills and passively scout as you drive or head for the outermost capture point. Be wary of the speedy M18 tank destroyers, any of the Sd.Kfz. 234 series, or any other quick tanks that may be trying the same thing as you. Once in a nice position (shadow cover, somewhere to retreat, nice sight lanes), sit and wait for someone to pass by. Don't stay tunnel visioned! Slower tanks may be approaching and they will be able to instantly destroy the Char 25t if it gets the chance. If you notice enemies at a far distance, first scout them using the scout key so your team knows where they are in case you miss or are destroyed. Next, either range-find, or just go for the shot if they are close enough. Neutralize the target, and either change position and then rinse and repeat.

Brawler: Surprisingly, this tank makes a decent brawler with its compact size, incredible speed, and great reload rate. Keep near the outer flanks of any main road or capture point, and drive around looking to shoot out engines/turrets. Try not to engage any heavier tank frontally, as you will be wiped out quite quickly, and you will rarely penetrate through their frontal armour. If you manage to get the first shot, you will have the superior reload for the follow-up shot, especially if their gunner is knocked out from the first shot. Be wary though, and assume the enemy always has a shot loaded, so either be prepared to go back into cover if they're gunner gets replaced.

Support: Due to the new repair mechanics, light tanks can help repair teammates if a friendly repair has been initiated. Stick near teammates, especially heavier ones like the T95 or Maus which may occasionally meet. When they engage in a firefight, either flank around the enemy to disable their gun/movement, or if your teammate already finished off the enemy(s) and is repairing, help them. Go around and help your teammates repair and disable/destroy enemies.

Mixed: Mix and match the tactics above and of other French lights. Try to flank and don't get destroyed. The roof machine gun can allow the Char 25t to harrass planes trying for a ground strike at the team, so there's always a role that the Char 25t can play as.

Skins and camouflages for the Char 25t from live.warthunder.com.