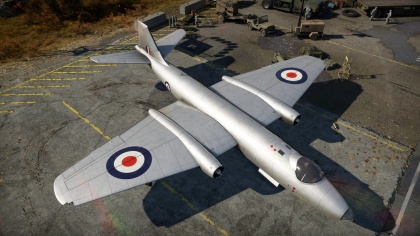 The Canberra B (I) Mk.6 is an interdiction model of the famous bomber, thus it is more suited for aggressive ground attack/interdiction roles by comparison to the B Mk.2 or B-57A models. Much like the B-57B, it retains its bomb carrying capabilities, but also features and impressive battery of armament consisting of 4 x 20 mm Hispano Mk V cannons. Not only this, but the B (I) Mk.6 has a 2000 round capacity for these cannons, making it a truly formidable attack aircraft and also allowing for air-to-air combat with other aircraft. Unlike the previous B Mk.2 model, due to the incursion of a gun pack to house the cannon armament, the B (I) 6 features wing mounted pylons to carry similar ordinance options to the previous model of Canberra. This makes the B (I) one of the most effective and versatile attack aircraft in game due to its ability to switch from conventional bombing, to ground attack and also interception.

The B Mk.6 also spawned the development of the interim B(I) Mk.6, which added a ventral pack containing four 20 mm Hispano cannon and an additional two hard points on the wings for external stores. It also included the Low Altitude Bombing System for the release of nuclear weapons in a climb from low altitude. The Canberra saw service with both the RAF, RNZAF and RAAF during the Malayan Emergency. RAF Canberra B Mk.6’s also served alongside the earlier B Mk.2 and Photographic Reconnaissance variants during the Suez Crisis in 1956.