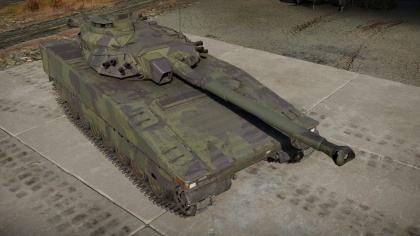 The CV 90105 TMLhas 20 mm of frontal hull armor, which is not significant enough to stop anything larger than a 14.5 mm machine gun. But, the upper plate is angled very well and as such could possibly prevent low-penetration autocannons from damaging the vehicle; the hull front, with its slope, can offer from 20 mm on the lower glacis up to almost 90 mm of effective thickness on the upper glacis. The side armor is composed of two spaced plates, one 6 mm and on 10 mm plate (for a total of 16 mm). This is enough to stop low-caliber machine guns, but a .50 cal will penetrate the armor with ease. A fuel tank is located between the spaced armor plates of the left side of the hull, right beneath the turret; the fuel tank is able to absorb machine gun bullets, protecting the turret crew from the left side from machine gun fire. The rear of the hull has a surprising 20 mm of armor, enough to stop low-caliber machine guns.

The turret has 20 mm of all round protection base protection. The turret sides and rear have a 5 mm applique armor layer, giving a total armor thickness of 25 mm. This is enough to stop machine gun bullets from penetrating. The gun mantlet has 35 mm of protection - enough to protect against some autocannons.

The only part of the vehicle that is vulnerable to heavy machine gun fire is the hull side and rear. The rest of the tank can only be penetrated by autocannons or anti-tank guns. Overall, the armor protection is light, to the point where the CV90105 is vulnerable to hull break. But, with 35 mm of protection, a hit to the gun mantlet - even by chemical rounds - will not result in a hull break. A hit to any other portion of the vehicle with a chemical round will hull break the vehicle. The ammunition of the vehicle is stored in the very back of the hull and turret, and there is a lot of ammunition, so a round hitting there will be hard-pressed to miss the ammunition. Even a shot from the front will often lead to many ammoracks when it passes through the rear of the tank. The only major source of protection for this tank is the engine and transmission. They are located at the very front, right, of the vehicle. A shot through this portion of the tank will often be absorbed, especially chemical rounds and autocannon shells. If a shell manages to penetrate through the engine block, it must also go through a 10 mm armor plate, which absorbs most of the shrapnel. This increases crew survivability extensively, but it can not be relied upon because of the hull break mechanic. Besides, even if the engine block absorbs the shot the tank will still be immobilized. Because of the ammunition stowage and the hull break mechanic, the CV90105 will often die to only one shot. Overall, the armor of the CV90105 is very thin and can not be relied upon, although it can protect the tank in certain situations.

The small caliber of the ksp 58 machine gun makes it largely ineffective against all armoured vehicles but the ones with an open compartment. It still can be used to ping targets as a rangefinding help.