Difference between revisions of "CM11" 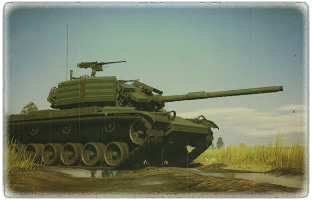 The CM11 combines the hull of a M60 Patton with the turret of a M48 Patton, and as such the base turret and hull armour is more or less identical to these two tanks, respectively. The base armour is quite resistant to APHE rounds, which may be fired by the occasional Object 906, Object 685, and T-55AM-1, but the vast majority of opponents at its rank use HEAT-FS and APFSDS rounds that can cut through steel like butter. To counter the former, the CM11 is slathered with ERA, and can generally survive the first shot from most HEAT-FS rounds. However the ERA offers close to no protection against APFSDS rounds, which are the round of choice in top rank battles, and as a result the armour should not be trusted.

Post-penetration survivability is also questionable. It lacks blowout racks and ammunition tends to be scattered around the tank, so successful penetrations can reduce the CM11 to a fiery grave. It is a good idea to take no more ammunition than needed.

The CM11's mobility is awful compared to its contemporaries. It weighs practically the same as the M1 Abrams while having less than half of the engine power. It is very slightly more mobile than the Chieftain Mk 10, but that is a very low bar, and unlike the Chieftain it does not have strong armour to make up for it. Expect to be among the last to arrive on the battlefield.

Like most Chinese MBTs, the CM11 should be played in a laid back, cautious manner since its firepower is good but its speed is not nearly sufficient for flanking quickly and catching enemies by surprise. Unfortunately its poor armour and large profile make hull-down sniping difficult, though it does enjoy better gun depression than most PRC/Soviet tanks. It is best to stay close to cover and observe the environment. When the enemies are spotted, pop out, shoot first, and try to at least cripple them. The DM63 APFSDS has very good penetration for a 105 mm round and the fast reload time ensures rapid follow-up shots. If the teammates do a good job distracting the enemy team or the CM11 somehow manage to flank successfully, the CM11 can potentially knock out several targets in rapid succession. Make good use of the thermal optics, as not all tanks at its battle rating feature them and those optics can come as a great advantage.

As a whole, the CM11 is somewhat like a tank destroyer, having a powerful gun but not much else. In a meta favoring high speed and high protection, it is rather out of place, but it can still work decently in the hands of a skilled player.