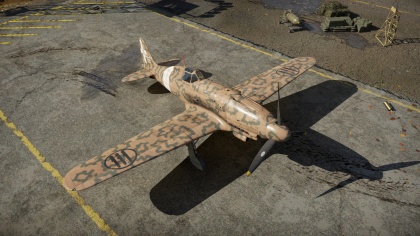 The C. 205 serie 1 is a rank III Italian fighter with a battle rating of 3.0 (AB/RB/SB). It was introduced in Update 1.69 "Regia Aeronautica" along with the initial Italian aviation tree.

The last Italian fighters of the war (the Serie 5, or "third-generation") all used the new German Daimler Benz 605 engine, putting them on a par with the best mid-war aircraft. The M.C. 205 was the only one of the Serie 5's to see much service with the Italian air force. The prototype, based on the M.C. 202, first flew in April, 1942. The added power allowed it to become the first Italian aircraft with cannon armament in the wings. It was considered extremely maneuverable at middle and low altitudes. About 200 were built and delivered starting in October, 1942, seeing combat service in the Mediterranean and Sicily the next year. Another 112 were built after the armistice and delivered to Fascist Italian forces, who used the plane until summer, 1944. Others continued on in Allied use and after the war remained in service as combat fighters until 1947.