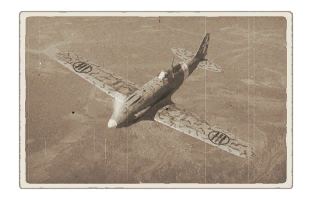 The ▀C.202 Folgore is a rank I German fighter with a battle rating of 2.3 (AB/RB/SB). It has been in the game since the start of the Open Beta Test prior to Update 1.27. In Update 1.69 "Regia Aeronautica", the C.202, as well as the other Italian planes in the German tree, were moved to the new Italian tree, although it still exists in the German tree for those who unlocked it prior to Update 1.69.

The second major issue the Folgore has is that the damage output is low. It needs quite extended bursts of fire to deal decent amounts of damage. Furthermore, the Breda SAFAT's damage potential drops off when it's fired at ranges above 300 meters. The poor armament also makes it less than optimal at engaging bombers and heavy fighters. The consensus by the community is that the best belts are anti-air, tracer or stealth for the 12.7 mm's and stealth and omni for the 7.7's. These seem to do the most damage.

The most important things the Folgore needs are Speed and Altitude. It's generally a good idea to climb to at least 5,000 - 6,000 meters before levelling out and gaining speed. From there on, it's Boom and Zoom, working your way from top to bottom. Priority should be given to P-39 Airacobras, F6F Hellcats and the early Spitfire, as these are hard to beat if they are allowed to engage on their terms. The Hellcat is a considerable problem for the Folgore, due to the fact it's considerably faster and climbs only slightly worse. The best way of dealing with them is to fight them at speeds above 400 km/h (250 mph), where the Hellcat begins to stiffen up, but you retain your very good roll rate, which you can use to spoil his gun solution by constantly changing direction.

For belts use tracers, anti-air or stealth as they deal the most damage, with a good mix of incendiary and shrapnel. Breda-SAFAT's shell velocity is low, hence they suffer at ranges greater than 300 meters, so only fire at or below that range for best effects. Furthermore, the armament is woefully inadequate to deal with bombers. It is best to avoid them entirely or focus on taking out the engines. The only exceptions are the very early biplane bombers, such as the Swordfish, Po-2 and the likes.

The Macchi M.C.202 was an Italian all-metal fighter interceptor, initially armed with nothing but twin synchronised 12.7mm (.50-cal) machine guns in the engine housing. The woefully ineffective armament for a fighter that plagued many other Italian fighters was finally remedied on the M.C.202 Serie VI (variants of the aircraft were designated with Roman numerals, I through XI), when two additional 7.7mm machine guns were added to the wings.

The Folgore (Lightning), as the new fighter was called, was aerodynamically clean and well-balanced. Its sturdy construction used modern flush riveting on all surfaces, and special care was taken in design and production to streamline all joints. The engine cover had a clean aerodynamic profile, which formed a smooth line from the propeller hub, through the canopy, and back into the empennage.