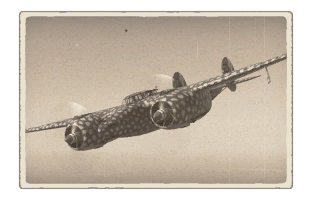 The three machine guns are arranged and located in the nose of the aircraft. Each is armed with different amounts of ammunition, which means that when all guns fire they will run empty at different times.

The Breda Ba.88 (P.XI) should be used to attack ground targets. It can be difficult to be used as a heavy fighter as your pilot is extremely vulnerable. Try to avoid enemy planes if possible as any enemy plane that engages you may be fatal for the plane's crew. Also note this plane can carry bombs, but it does not have air brakes and or a bomb sight, so you must manually slow down and estimate the payload release on target.

The Breda Ba.88 was a Italian heavy fighter bomber that was made for the Regia Aeronautica's 1936 requirement for a twin engine heavy fighter capable of 329 mph, 2000 km range, and capable of carrying 20 mm cannons. It made its debut around late 1936 to 1937 and during its evaluation it was a promising design. Standard firepower of the plane was three 12.7 mm Breda SAFAT machine guns in the nose and a gunner in the dorsal turret with a 7.7 mm Breda SAFAT machine gun. The prototype aircraft flew with two Isotta-Fraschini K14 series while production models of the plane had two Piaggio P.XI RC.40 "Stella" 14-cylinder air-cooled radial engines capable of 1,000 hp each, setting several new world speed records in 1937, with speeds in the 550 km/h range. By 1938-39 the Breda Ba.88 came into production but it would be retired in 1941 with only 149 made, after only brief service in Libya in the summer of 1940. The plane was found to perform much more poorly with an operational bombload and unsuitable for the designated role of heavy fighter/assault.