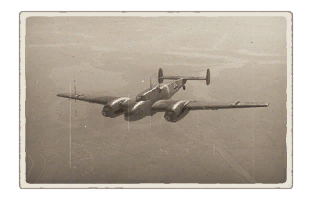 In game it is one of the fastest aircraft at its battle rating with a speed of 582/560 km/h (arcade and realistic battles as of 1.79) and a BR of 3.0. It packs incredible firepower with 4 x 7.92 mm MG 17s and 2 x 20 mm cannons with a copious 360 rounds all in a centreline mount, a hard-hitting package that will reach out and swat aircraft far away.

The Bf-110 C-7's armament is completely centre-mounted on the front of the fuselage, resulting in little to no-one convergence, and results in a dense fire group. Keep in mind however that the 7.92 mm bullets are somewhat faster and lighter than the 20 mm's fired from the MG FF/M cannons and as such will require slightly less leading. While not much of an issue within close range (approximately <300 m), at a longer distance it will result in the 7.92 mm rounds missing if fired simultaneously with the 20 mm cannon rounds. However, being a pure Boom & Zoom fighter, it is generally recommended to fire both guns when attacking enemies in order to maximize hit probability at close distances when making a high-speed pass.

The MG FF/M 20 mm cannons should generally be considered the BF-110 C-7's primary armament as they will be responsible for the majority of the damage dealt. Careful aiming will only require a few shots with the high explosive shells to disable an engine, blow off a wing or knock out the pilot. It is important to remember that the 20 mm shells have fairly poor ballistic coefficient and tends to drop a lot more than the 7.92 mm's at the same range. Since the 20 mm minengeschoß shells contain a much greater amount of HEI/HEI-T than other belts, their usage significantly enhances damage output. Initially, the ammo pool of 360 rounds may seem low at a first glance, the destructive power of the shells and the MG FF/M's relatively slow rate of fire more than makes up for it.

The nose-mounted MG 17 machine guns are standard and are identical to the ones carried on early war biplanes and early BF-109's. They have a high rate of fire and high precision but a low damage output. Equip either tracers or stealth belts in order to maximize damage output in conjunction with aiming for vulnerable areas on enemy aircraft such as fuel tanks and engines.

The defensive armament consisting of a single MG 15 is effectively useless for the far majority of the time. It will not be able to dish out enough damage, and arguably even worse it will only be able to return fire at chasing planes that fly behind and above the BF-110 C-7. Do not under any circumstance rely on it as an effective mean to fend off chasing planes as it's cone of fire is limited and damage output is too weak to make much of an impact most of the time. It is much better to perform evasive manoeuvres and rely on the BF-110 C-7's sturdy airframe in order to make it back to base or allies than for the gunner to shoot the plane down. That being said, there is a chance that the gunner will land a few shots which may take out the chasing pilot or the engine of his aircraft.

What it cannot do is turn fight, and this is where a lot of players make a fatal mistake. Heavy fighters cannot manoeuvre like a single engine fighter, it has an unusually poor roll rate and loses energy fast, and can unexpectedly snap-roll: rudder control is critical. It is a pure “Boom & Zoom” fighter and like others of its ilk, live by 2 rules: “Speed is Life, Altitude is Life Insurance”, and “Turn to engage (fire at), not follow”. Manoeuvres that retain your energy are key, keep your speed and/or altitude up. The 110 really shines in bomber attack or bomber escort where you will have positional advantage and gun solution first.

When engaging a target only turn to shoot (less than 60-degree turn), the moment you realize you cannot get a firing solution to perform other manoeuvres to keep the advantage. For instance, if your target turns hard, pull up trading airspeed for altitude while watching what your target does. As you slow in climb you can turn tighter (even use flaps briefly) and position yourself for another intercept. If you find yourself under threat, an unloaded extension (slow pushover) can be employed to efficiently gain speed. The Bf 110 can dive very fast to rejoin friendlies if needed. A team with bomber smacking Zerstörers and manoeuvrable fighters will decimate the attacking force in Arcade Battles. If you pick up a tail, just remember to manoeuvre yourself to give your teammate the best chance to taking out your pursuer, and do not count on the gunner.

When you first purchase the Bf 110 C-7 make sure you research the machine gun and cannon belts first; those are vital for success. Consider tracers ammo for the machine gun and stealth or air targets for the cannon. It is excellent at ground attack as well with guns and bomb selection, but remember that outside of AB, you still start on the ground and have no bombing reticule.

Named the “Zerstörer” (“Destroyer” in English), a very appropriate name for its mission, to destroy anything that is in front of it. In the early days of World War 2 the Bf 110 did very well in roaming wolfpacks, being superior to the opposition in the skies over Poland and France, but that changed drastically in the Battle of Britain. Mounting bomber losses resulted in the fateful decision to force the 110’s to stay very close to bomber formations, losing position and speed advantages over the RAF fighters. Not surprisingly it resulted in a drastic increase in losses. Faced with faster fighters and more manoeuvrable like the Spitfire it was pulled from the front line, only to return in new roles like the “Jabo” fighter bomber and the "Nachtjäger" night fighter. The most successful role of the aircraft was performing night interdiction duties, where its task was to seek out and destroy enemy aircraft, most notably British bombers participating in night raids. In the "Nachtjäger" role, the plane was equipped with FuG 220 and FuG 202 Lichtenstein radar, optionally equipped with a "Schräge Musik" installation consisting of 2 X 20 mm MG FF/M cannons mounted at a 60 degree angle, and a third crewmember seated behind the pilot to assist in the duties with spotting targets, as well as performing the duties of a radar operator.

"The Messerschmitt Bf 110 was a twin-engine Zerstoerer (Destroyer, heavy fighter) used by the Luftwaffe in WWII. Due to poor performance in its intended role, it was quickly relegated to ground attack and night fighter roles.

The Bf 110 C was the first truly mass-produced variant of the 110, powered by the DB 601. The Bf 110 C-4 had improved crew protection. The Battle of Britain showed the 110’s fatal weakness which was its inability to dogfight with single-engine fighters. Moreover, while having a decent top speed compared to its main adversary, the Hawker Hurricane, the 110 had very poor acceleration.

Nevertheless, the 110 was a good long-range escort fighter, as it had no range limitations like the Bf 109 E. Working above the bombers, the 110 could successfully use hit-and-run tactics against attackers; they could dive at the enemy, fire their extremely powerful armament from a distance, and return to a higher altitude."