Difference between revisions of "Bf 109 Z" 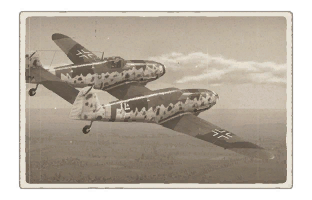 The Bf 109 Z is a gift rank IV German twin-engine fighter with a battle rating of 4.7 (AB/RB/SB). It was introduced in Update 1.79 "Project X". The Bf 109 "Zwilling" is, quite literally, two BF 109 F's stuck together. Featuring a quartet of the Mk 108 Maschinenkanone's, also nicknamed "Sledgehammer" due to the firing sound, mounted in the middle of the plane, it is capable of shredding anything in its sights. 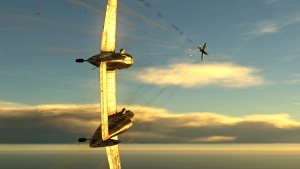 The Bf 109 Z can be outfitted with the following ordnance:

With its decent armour, centre mounted cannons, and a pilot that is away from the middle of the craft, the 109 Z is geared towards head-on combat. When employing the tactic, be weary that the Mk 108 30 mm's have a significant amount of drop and slow travel speed, so significant leading is necessary in order to land the shots. Also note that due to the heavier nature of the plane, you will need to dodge the wreckage of downed enemies.

However, where the Zwilling really shines is as a bomber interceptor. The large bodies of bombers make it so that the Mk 108's drop isn't as problematic, and the off-centre pilot makes it harder for their gunners to land a shot on your pilot. At the start of a match, climb to bomber altitude (4k-6k metres) and start hunting for prey. If all of the bombers have been destroyed, or there weren't any to begin with, you are safe to use it as a Boom-&-Zoomer or an air superiority fighter.

With the start of allied bombing campaigns against German strategic targets in 1942, the Luftwaffe was forced to go onto the defensive for the first time in the war. This sudden turn of events sparked an urgent demand for new heavy fighter and interceptor designs that would counter the ever increasing onslaught of allied bombers and their respective escorts. Although the Messerschmitt company was already working on such a new aircraft that would replace the dated Bf 110 - the Me 210 - several problems during development delayed the project’s completion. As a result, new versions of the Bf 110 had to be developed to counter the new threat. However, the RLM (German Air Ministry) wasn’t content with the creation of even more modifications of the aircraft as they planned to decrease the amount of different variants for all aircraft in service at the time in hopes of addressing logistical problems that strained production. Inspired by the previous He-111 "Zwilling" project, Messerschmitt engineers began work on a similar alternative heavy fighter based on the Bf 109, that could easily be mass produced and offer better performance (in reference speed) than the Bf 110 already in service, whilst at the same time being cheaper to manufacture than newly designed machines.

By taking two standard Bf 109Fs from the assembly line and "welding" them together, Messerschmitt engineers created what would become known as the Bf 109Z-0 - the first prototype of the "zwilling" Bf 109. In 1943 however, a bombing raid of one of the Messerschmitt plants near Augsburg led to the destruction of the prototype, cancelling the planned tests. Despite this setback, the engineers kept working on the concept and less than a year later, in spring 1944, a new Z-1 prototype, based off the Bf 109G-6, was created. The second prototype differed from the first one, apart from being based on a later variant of the 109, in the abandoning of rifle-caliber guns in favor of interchangeable large caliber autocannons, a common trend for late-war German machines. In the end, the project was ultimately cancelled as resource shortages began afflicting the German industry in the final stages of the war and the concept of a twin Bf 109 fighter was abandoned for good.