Difference between revisions of "Bf 109 G-6" 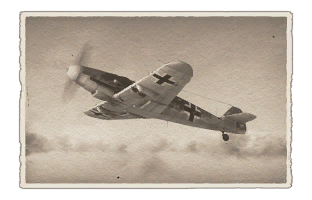 The Bf 109 G-6 is, while stock, a difficult plane to fly, and needs the upgrades to even be considered an opponent for its adversaries. Once upgraded, however, it performs decently enough to even the playing field and allows an enjoyable experience.

This variant is played much like its predecessors, so stick to energy fighting. Because of its poor performance, it's imperative to keep your energy state high at all times.

The two machine guns are located just forward of the pilot firing out of the nose of the aircraft. The cannon (either 20 mm or 30 mm) is mounted in the propeller shaft and will fire through the propeller hub.

When it comes to armament you have the choice of a 20 or 30 mm cannon in the engine, and gun pods of the same calibre. The 20 mm gun has good gun characteristics with decent damage and a good ammo count, while the 30 mm deals devastating damage but has a low ammo capacity and a very slow shell velocity. The gun pods aren't recommended as they dramatically decrease the plane's performance.

Your worst enemies in the Bf-109 G-6 are the Spitfires and the P-47D/N/M Thunderbolts. The Spitfire can out-turn you at almost all altitudes below 4,000 meters. You have to be really careful when engaging a P-47 with an altitude advantage against you. The best thing you can do in that case is to turn away and keep climbing. If the Thunderbolt dives on you, turn into the head-on, fire a few rounds then use your superior roll rate to do a split-S. If a Spitfire engages you DO NOT try to turn with it! If you try, you will have fallen into their trap, your best defence is similar to the tactics employed against the Thunderbolt, split-S and use your roll rate.

As mentioned earlier, the Bf 109 G-6 performs badly in stock conditions with bad flight characteristics (essentially a brick with guns) and armament that is vastly inferior to most other fighters. This changes drastically with upgrades. The upgrades are listed in the order in which they should be acquired.

Afterward, get all the cannon and machine gun upgrades and the remaining for better flight characteristics. Bombs and rockets should be ignored until you have researched everything else since they are not very useful.

The Bf 109 G-6 "Gustav" was the most mass-produced variant of the Gustav series. It entered production in the late Autumn of 1942, and was initially designed as a universal platform which could be quickly converted to various roles as needed in field conditions. The G-6 was also equipped with improved engines, either with MW 50 methanol-water injection, or the high-altitude GM-1 nitrous oxide injection. The DB 605AS engine, which used 96-octane fuel, as opposed to 87-octane, could reach over 2,000 HP at 500 m and 1,800 HP at 5,000 m. These variants were designated Bf 109G-6/AS. The armored seat had a transparent seat back, which significantly improved visibility. A total of 700 /AS aircraft were produced.

In addition to those changes, the G-6 was also the first to house the 30mm MK 108 cannon, which had 60 specially designed incendiary shells. A single hit was usually enough to destroy a single-seat fighter, most bombers needing no more than 4 or 5 hits.