Difference between revisions of "Bf 109 F-2" 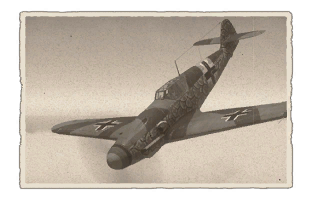 The F-2 can load either 4 x 50 kg or 1 x 250 kg bombs. Unless you like to fly at a severe disadvantage, do not use the bombs unless you have to in order to win a match, for example after refueling/restocking at the base. The bomb load is nowhere near large enough to make a fighter bombing trip worth it. While the 8x RZ.65 rockets might look enticing, their actual use is next to nothing, only serving to reduce the planes performance. When using AP-heavy ammo belts, the cannon can penetrate light and medium tanks, but time is better spent fighting planes and practising your 109 skills. Additionally, save the bomb unlocks while grinding out the plane until last and focus on performance.

Try to unlock engine upgrades first. Even with the different 15 mm belts, the most challenging aspect preventing you from getting kills will be stock aircraft performance.