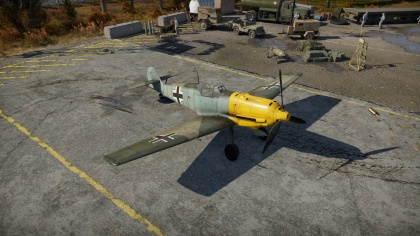 Remaining a great energy fighter against its historical opposition, the E-3 is somewhat troubled by the fact that it often faces mid-to-later-war planes such as the P-47D. To engage these, make sure to have a clear energy advantage; if attacked, fly defensively and attempt to bleed the enemy's speed while pulling them down. The Bf 109 E-3 is often regarded as a poor turner, a reputation coming out of the fact that its main rival, the Spitfire, simply did it better. However, with combat flaps, the E-3 is a respectable turner able to out-maneuver most planes that outperform it in firepower or other factors.

Just as the with the E-1, new players should adopt a hit and run tactic with the Bf 109s (also known as Boom and Run). While often called a Boom & Zoom aircraft, the 109s are not dedicated Boom & Zoomers, and many other aircraft such as the Fw 190 do it much better. While it is true that a pure Boom and Zooming approach can be used for the 109s, limiting oneself to this enormously undermines plane efficiency. That said, the 109s do build up speed quickly in a dive, and they have a respectable zoom climb that ends in a strongly sustained climb at ~270 km/h (optimal climbing speed 260, and dash 280 km/h). Doing so will often give the player the maximum speed or altitude advantage they can have over their chosen target. A straight-up bounce, with a short extend from the target and a slowly increasing climb leading into an Immelmann, tends to work best for rookie pilots. Remember to check the six and surroundings during the climb and just before diving back onto the target.

The E-3 can load either 4 x 50 kg or 1 x 250 kg either. Unless wanting to fly at a severe disadvantage, do not use the bombs unless it is necessary to win a match, for example after refueling/restocking at the base. The bomb load is nowhere near large enough to make a fighter bombing trip worth it.