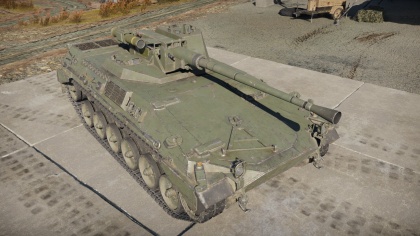 The Begleitpanzer 57 is a rank VI German light tank with a battle rating of 8.3 (AB/RB/SB). It was introduced in Update 1.73 "Vive la France".

At first glance, the Begleitpanzer 57 may be confused for a SPAA due to the light armoured chassis and a rapid-fire 57 mm auto cannon. On the turret is also a TOW launcher that can be fired in a SACLOS manner, meaning it will automatically align itself with the cross hair in-flight.

The Begleitpanzer 57 overall construction is similar to that of the T114 with light armour all around that even heavy machine gun ammunition can penetrate through the sides. The turret's nature with its exterior gun mount also has its similarities.

As a light tank, the Begleitpanzer 57 carries a great firepower punch for its mobility despite its lack of armour. A rapid firing 57 mm cannon carries enough penetration rivaling that of the ZSU-57-2, but the addition of a TOW launcher system makes this vehicle a dangerous opponent by being able to engage a variety of target at its leisure.

While the cannon shares the calibre with the Russian 57 mm gun, it is quite different in performance. The Russian SPAA has a slightly better combined fire rate and significantly more accuracy at range. You also start to lose the penetration advantage at 1 km compared to the APHE belt of the ZSU-57-2. All of this combined makes you very reliant on your ATGM, of which you only have 6. Upgrading to the better ATGM is highly encouraged, the APHE belt can be completely ignored as it can not reliably perforate Russian side armour.

The Shooting Range #73 - Metal Beasts section at 00:30 discusses the Begleitpanzer 57.