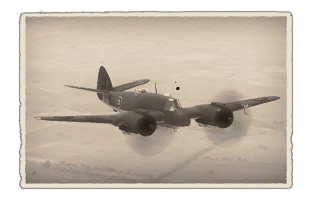 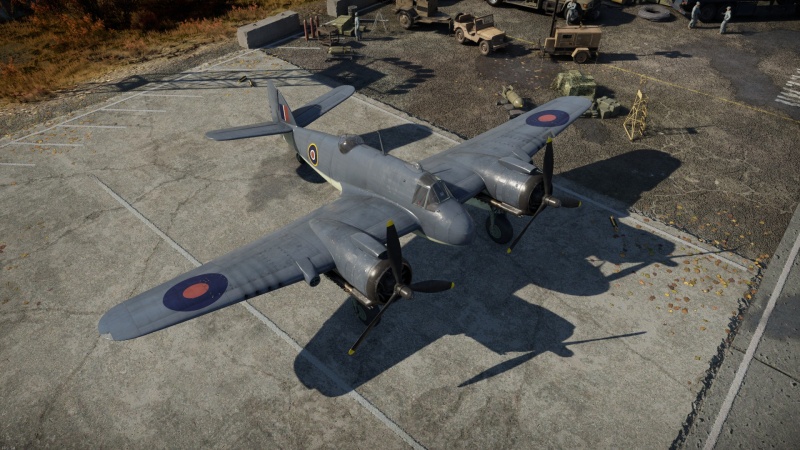 The Beaufighter Mk X is armed with:

The Beaufighter Mk X can be outfitted with the following ordnance:

The Beaufighter Mk X is defended by:

Just like the Mk VIc version of the Beaufighter, you can use this aircraft in a variety of roles. Heavy fighter, torpedo bomber, and attacker are all still viable roles for this aircraft. The big difference is in how effective you are at these roles. In the ground attack role, you see a large improvement in capabilities. This is mainly due to the additional ability to carry rockets for ground attack, and the increase in 20 mm cannon ammo. Torpedo bomber tactics should be avoided, however. With the torpedo on offer still being very poor in terms of drop requirements, surviving against incoming flak will be a real challenge. Heavy fighter tactics can be used once again, but with a few changes. Compared to the Mk VIc, you pack a much bigger punch with your weaponry. Unfortunately, this adds weight to the airframe. Thanks to the extra weight, climb rate, manoeuvrability, and speed will all suffer. In short, you will find it harder to find and catch targets, but you can shoot them down more easily. Overall, stick to relatively low altitude. Go after ground targets whenever you see the opportunity and attack any bombers operating at low altitude the second they show up. In order to ensure effectiveness in this role, ground target or universal ammo belts should be used with the 20 mm cannons. The same applies to your 7.7 mm machine guns ammo belts; armoured or universal should be used. With a good flight escort, you can take give your opponents a lot of trouble attacking their ground units, ultimately helping to secure victory for your team.

Most of the last mass-produced aircraft in Britain were Beaufighter TF Mk Xs. This model was a logical continuation and development of the Mk VIC, had two Hercules Mk VI engines optimised for low level flight, and could carry the standard torpedoes produced in Britain and the United States. The TF letters in the designation stood for "Torpedo Fighter". The aircraft could also carry a bomb load of 1100 kg, and with the help of an AI Mk.VIII radar installed in a 'thimble' nose, they were highly capable machines employed in detecting and destroying surface shipping. In the Far East the Beaufighter was reputed to be nicknamed 'Whispering Death' by Japanese soldiers, although some modern historians believe this to be Allied propaganda.

In March 1945, over a period of 48 hours, Beaufighter TF Mk Xs of No 236 and No 254 Squadrons found and destroyed five German submarines.

The last major variant of the Beaufighter, over 2200 were built in Britain.