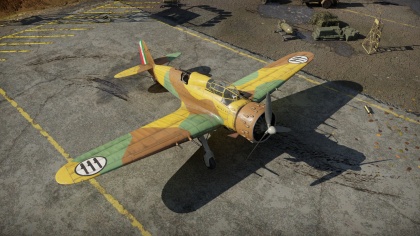 The Breda Ba.65 (K.14) L is a ground attacker of rank 1.0 (Reserve), which does its job well thanks to a high ammo count and the fact that it receives an air spawn in Realistic Battles (which makes up for the slow top speed). In Realistic, most of the time you will be flying against Russian planes or on some maps, Americans and British. Your tail gunner, which is armed with a 7.7 mm machine gun, will do medium to high amounts of damage if armed with Universal belts. The 7.7 mm machine gun is more dangerous the closer the enemy gets. If you get a chance at a head on, go for it because you will most likely win- the plane has very strong frontal armament for its tier.

Although the Ba.65 is an attacker, it can be used in an anti-fighter role with much success. The plane receives an airspawn which invariably allows it a significant altitude advantage over enemy fighters. Boom and zoom tactics therefore become very effective against slow, climbing, enemies. The Ba.65 has very good armament for its battle rating, and they will be enough to destroy any enemy fighter with one precise diving attack.

Otherwise, the Ba.65 can also be used effectively in the intended ground attack role. Use it's airspawn to gain speed in a dive and reach the target before enemy fighters arrive. Then, the plane's bomb load are able to take out armoured ground targets, and its devastating frontal armament can kill many more lightly and non armoured targets/

The Breda Ba.65 Nibbio (Kite) is an Italian interwar, twin seater combat aircraft that was designed with versatility in mind. The aircraft was intended to perform a multitude of combat tasks ranging from conventional ground attack to intercepting hostile aircraft. However, due to many shortcomings of the Ba.65, it was later confined to pure ground support roles, and at the end of the war, converted to a trainer aircraft. Contrary to the positive first impressions that the aircraft left on it’s maiden flight in 1935, is the relative unpopularity among its crew due to the difficulties they faced while operating it.

Nevertheless, over 200 Ba.65 aircraft were built between 1935 and 1939. The aircraft fought on several theaters of war such as in Spain and North Africa, whilst some versions were also exported to Chile and Iraq.