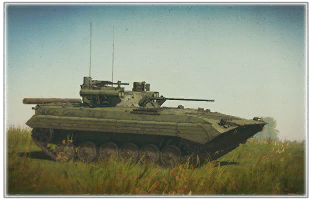 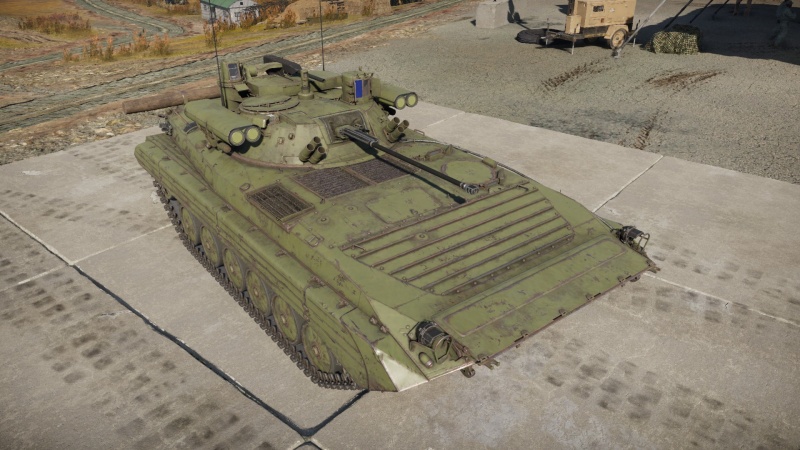 The BMP-2M is a squadron rank VII Soviet light tank (infantry fighting vehicle) with a battle rating of 8.7 (AB/RB/SB). It was introduced during Update "Starfighters".

During the stock grind, the vehicle is best played as a scout/SPAA platform, as the stock ammo with the exception of the ATGMs is poor. Once it is spaded, the vehicle is basically a complete lineup in itself, as it can play the part of a light tank, with excellent manoeuvrability, the ability to scout and repair, and the fast-firing autocannon to flank and destroy light to medium armoured targets, and mark the heavily armoured targets for allies or eliminate them with ATGMs. If played cautiously, it can also be played as a true IFV, supporting MBTs in CQB. However, when playing like this, it is a SUPPORT vehicle, and should not engage in frontal brawls with MBTs, as it will quickly be destroyed. Everything that is a .50 cal or of larger calibre will absolutely shred the BMP-2M to pieces. The BMP-2M also has hullbreak, so it is best not to be shot at all. It can be played at long range, using its scouting ability and ATGMs to know out targets at long range. However, beware that your ATGMs have a lower velocity than the common APFSDS and HEAT-FS round that your enemies will fire. So if you and your enemy fire at the same time, you will most likely be killed first. Once the laser rangefinder is unlocked, one can use APDS rounds at range as it can easily pen the side and roofs of most enemies it will face, and the high volume of rounds will quickly disable if not destroy the target. This vehicle can also be played as an SPAA, with its fast firing 30 mm autocannon and proximity fuse ATGMs.