Difference between revisions of "B1 bis" 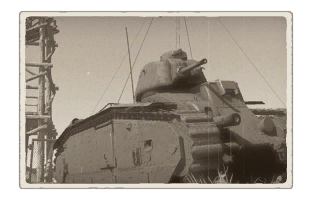 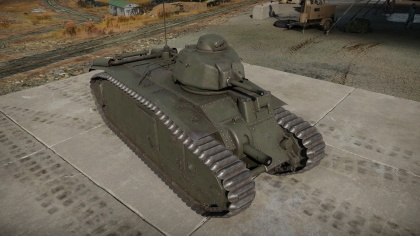 The Char de bataille B1 bis (Battle tank B1 "repeated") is a Rank II French heavy tank with a battle rating of 2.3 (AB/RB/SB). It was introduced in Update 1.75 "La Résistance". With arguably the best armour at its BR, this tank is a beast in long-range engagements since it is hard to penetrate at distances. While not having the best armament, it should do the job taking care of these dangerous early SPGs and light tanks. The "bis" suffix is a French way of marking an improved version.

This tank's mobility won't allow you to position fast enough. Taking time is the only way to get where you want safely. Since this tank is pretty long and narrow, do not engage in cramped spaces since you will not be allowed to manoeuvre as you wish. You reverse speed won't allow you to retreat if things get bad around you, stay behind the frontlines, making good use of your armour.

In order to effectively use this tank's armour, there is a few things to consider. First of all, there a lot of shot traps, the main ones being the turret ring, the grille on the left side and the hull gun mount, in order to minimize your enemies' chance to hit these weak spots, stay away from them. Second, even if your armour is very strong for the BR, do not completely rely on it by sitting around in an open field: you will eventually get hit where it hurts. The third thing to consider is your small and thick turret: hide that big clumsy hull behind a hill and pop out only your hard "head", take a shot, fall back, reload, repeat. If something goes wrong (i.e. getting shot in the turret ring), there is usually enough men left to take the job left by their dead "camarade". Do not bother getting spotted: it is your job to stay in the enemies' sights while your lighter teammates do what they ought to. In some situations, it can even be used as a breakthrough tank, rely on your own experience to guess when it is time to do so.

With the same gun as most other Rank 2 French tanks, the B1 bis will never be recognized for having a fearsome armament: penetration rates are even lower than most reserve tanks while reload time is twice as long (a known feature of early French tanks). The turreted armament is only good at firing light targets such as SPGs and light tanks. Elevation and depression angles are amazing but turret slewing rate is a bit slow: this tank has been designed to be hull-down. As for the hull-mounted gun, it should only be used as a close range defence device, as it has poor penetration rates and high drop. Exposing your hull-mounted gun for long range engagements does not only makes you vulnerable, it is also mostly ineffective.

Due to the extremely heavy frontal armor, one should try to use mobility to flank the B1. However, if that isn't possible, you'll want to try and hit the "mailslot" of the turret ring. It may be a tricky shot, but there's only ~40 mm of armor there. If left flank is exposed, the grille is only 15 mm thick and has a well-placed fuel tank right behind it, turning the B1 into a burning torch, ready to explode. 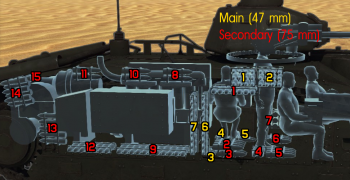 Ammo racks of the B1 Bis

The Char B1, upon playing it for the first time will be slow in both acceleration, max speed and turret rotation speed. the Hull gun is most likely the most frustrating gun to aim because of the limited firing arc it has. The best way to play the B1 bis is to hold down a position, preferably hull down (as its turret is thick and small, it will ricochet most shots it will take). Playing the B1 bis rightly, there is only 3 ways to get killed: