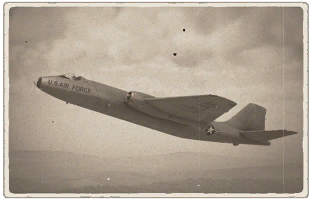 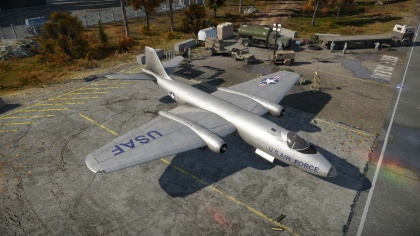 The B-57A is an unarmed plane so survivability depends on the speed. Luckily the two Wright Aeronautical J65 turbojet engines provides enough thrust to out-speed many fighters. Maximum speed is 950 km/h for a fully upgraded variant and 902 km/h for a stock variant. As was mentioned maneuverability is the key, but be aware of pulling your nose down, because the airframe can survive only -6G. However +12G is almost unreachable value for the vast majority of your opponents. These attributes allows to do very sharp and high-G turns. Payload is adequate. Of course it´s not a B-29, but 9 x 500 lb bombs or 6 x 1,000 lb bombs can do a really nice job.

As for the B-57A have 2 powerful jet engine and no guns. The tactic for this bomber is simple. Start your game at the air and dive. You will gain speed while you are diving. Hold the speed until you destroyed the your target. After that, pull your head up to 60 degree. Climb to 10,000-16,000 ft.

The 1,000 lbs are lovely base-destroyers, 4 x 1,000 lb bombs are enough for a single bombing-point in RB and SB, for a AB you need more bombs, a whole bomb-load is usually enough to destroy a bombing-point. In AB I recommend to fly high as it is possible, in danger you can always use your top-speed to run away. In a RB mode is very important to communicate with a team. Don´t be afraid of using a chat window, just write which one base you are heading. This can avoid a situation, when multiple bombers are going to bomb the same target. If you are alone bomber in yours team (or something went wrong), count that you are able to destroy 3 bases in 2 runs(With the 1,000 lb bombs, 3 bases in 3 runs with the stock payload).

The 500lbs (stock bomb-load) is also a great possibility. Use these if you want to destroy some land-targets as are tanks, destroyers or pillboxes. For all tanks and pillboxes you need only 1 x 500 lb bomb, a single bomb can be used also for a destroyers. In AB I wouldn't use ground-target bombing, but if you want to, keep eye on your speed value. Be prepared for enemies with a tunnel-vision (a condition, when the player focuses only on a single goal - shut down). However RB are awesome for ground-units score-farming. Try to be accurate. To do so, it´s recommended to fly in the same line as is the targets move. Pre-aim slightly to track the future position of the ground unit.

Try to fly low to increase a hit-change (but not to low, bombs splash damage could blow you up - 400 m over the target is optimal). However be aware, the faster are you going the less accurate the aiming cross is. You need to compensate this. Just practicing can show you how to do it. To maximize exp and lion income attack big pillboxes (not moving target = easier to hit) or destroyers. TIP: To combine tactical awareness and accurate bombing try the boom and zoom tactic. Copy the line of ships movement, drop to 500 -400 meters (enjoy your highest speed), bomb the target, pull into almost vertical flight (70% angle), reach 2500-3000 meters, turn back, and dive on the target again. Keep in mind, that B-57 is not a dive bomber, so level the plane quickly. Also be aware of -6G limit, just don't push the nose down aggressively.

To survive on the battlefield try to keep out of fighters radius. But if the enemy finds you and is prepared to shoot you down, try these tips: