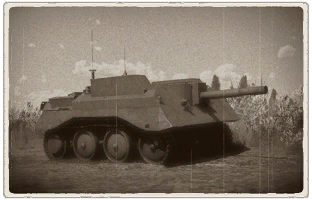 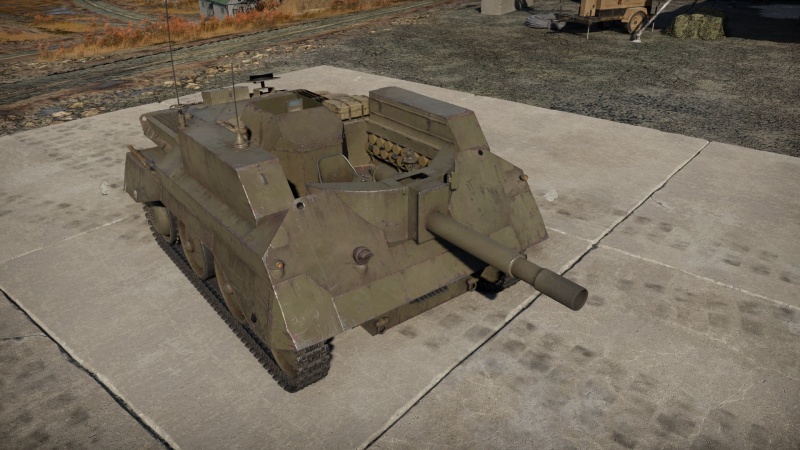 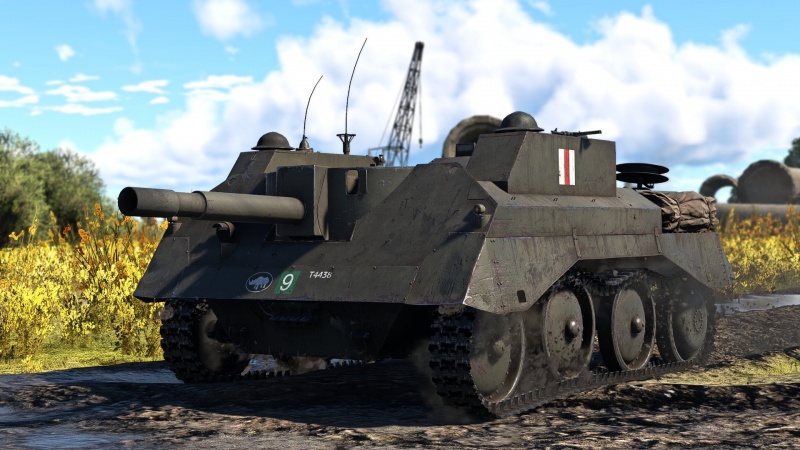 The Alecto I is a premium gift rank I British tank destroyer with a battle rating of 1.7 (AB/RB/SB). It was introduced during Update "Wind of Change" as a reward for the "Battle for Arachis" event.

Arriving a tad late to meet proper action in the Second World War, the Alecto was developed as a close-support self-propelled gun, to provide support fire to the reconnaissance and airborne units. As timing is no longer an issue, the Alecto is now prepared to reinforce the early British lineup, with much competent firepower.

Constant repositioning and long-range firing will be crucial as this is where the Alecto excels at; mobility and firepower. Despite not having solid shot rounds, the chemical HEAT rounds bring unexplored capabilities to the explosive-lacking British Rank I.

Overall, a very uncomplicated vehicle with some obvious drawbacks yet a very dynamic playstyle. Players that enjoyed the swiftness of the Tetrarch and the lightness of the Stuart will surely get the best out of it. 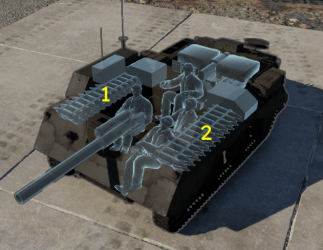 Ammo racks of the Alecto I

The Alecto's usage in battle could be somewhat monotonously difficult if no situational awareness or thoughtful positioning is used, due to the relatively poor defensive qualities of the SPG. Fortunately, This can be easily overcome when considering the vehicle's main traits. Therefore, the sniper role is, by far, the go-to role if a player wants to enjoy and learn the best out of the Alecto.

The decent ballistics of the gun and the capable HEAT shell can stand for some serious long-range shooting. Considering that most British tanks at its rank are armed with the 2-pounder, the Alecto provides an upper hand in long-range engagements due to the chemical rounds. This explosive sniper game style should not be overlooked, as it allows for an often enjoyable learning experience for latter gameplays as the FV4005 or the G6 Rhino.

The HE and HEAT rounds come with the valuable bonus of overpressure damage, something often difficult to achieve on the 40 mm 2-Pounder gun due to the poor or lacking HE filler. At the rank, many lightly-armoured or exposed vehicles such as Panzerjäger I or Flakpanzer 38 can be found; these will often become easy targets for the Alecto.

The fixed gun limits the close-range engagements since most tanks encountered will be agile enough to manoeuvre easily around the Alecto. Therefore the sniper role will favour this fixed gun design. The Alecto got nothing to envy in the mobility department, so the commanders could take advantage of the nimble chassis and find good sniping positions or be ready to relocate when necessary.

Something important to note is the limited elevation of the howitzer. Often the most irregular terrains such as those on Tunisia, Ash River or Frozen Pass will be challenging for the Alecto. Not only on gun traversing but in practical firing positioning. Here is when knowledge of the map terrain will help players get the most out of the flexibility of Alecto's mobility.

Since no tank design is perfect, the Alecto will be no exception. The thin protection and the lack of any roof armour mean the tank can suffer from the lightest of the guns, namely 12.7 mm Browning machine guns and small calibre autocannons as those on the Anti-aircraft vehicles. Smart tankers should seek to never stay in the same position for too long, as enemy aircraft or revengeful players could find their way to you. The smoke shells can help in this regard. Whenever in trouble, a few smoke shells can obscure the enemy's sight enough for a retreat or a brave standoff up close and personal. Players should never forget to load some smoke rounds for the most desperate needs.

The Alecto I is a British self propelled gun developed from the Tetrach light tank towards the end of the Second World War. Fitted with a newly developed 3.75 inch howitzer in an open top casemate configuration, the Alecto only completed trials after the war had ended, leading to it serving briefly with the British Army in Germany and the Middle East without seeing any combat.

A further development of the Tetrarch light tank concept resulted in the Mk.VIII Harry Hopkins light cruiser tank, which Vickers-Armstrongs was creating to be an airborne tank. Since the mass of the vehicle by the beginning of the production exceeded the allowable for the project, and the design itself still required serious improvements, the company's engineering team decided to continue their work, turning the project into a light self-propelled unit with a 3.75”” howitzer Q.F. 95mm. The chassis engine compartment was completely unified with the Harry Hopkins, while the combat compartment and the gun were completely new for the series. The SPG is called Alecto I (or Alecto Mk. I) went to the testing in 1944 and, after implementing new changes (again with an increase in the mass of the machine), the self-propelled guns were built in a small batch by June 1945. The war had already ended by that time, and all units built were used mainly for training purposes and were decommissioned in 1955.