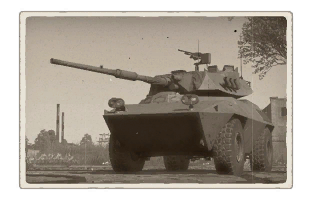 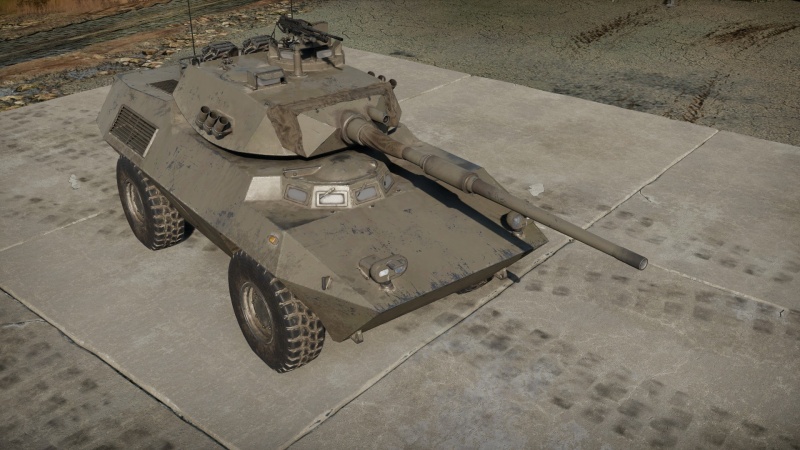 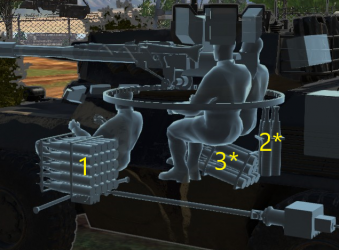 For the AUBL/74, it is recommended you play in ground realistic battles. This vehicle should be played as either a Scout, Flanker or a Sniper. Use your mobility to relocate from one sniper position to another. Never brawl unless you have to. Due to the highly mobile platform (FIAT 6616), your mobility is one of the best in its class. Use your mobility to get to a good attack position early in the game to launch a surprise attack from the side. Use the terrain and obstruction to hide from enemy. Use the "free-look" button ("C" by default) to look around frequently to learn the situation around you. Make sure nobody is looking at your way before you poke out and fire. It's a light tank, so you also have the ability to scout enemy players, allowing you to gather intel on the positions of the enemy team and also earn points, as for every vehicle destroyed by your team after you scouted it, you also get an assist. It is good to note that the AUBL/74 trades armour for mobility, you don't have any armour on this vehicle. With only 8 mm of armour on the front of the hull, the armour on this vehicle won't even stop high-calibre machine gun fire at mid-range. Don't even think about taking a shot, it's impossible unless it's a sub-calibre APDS or APFSDS round in which case it may pass straight through the vehicle without inflicting any damage. You'll also be at the mercy of artillery, and with the recent pressure damage addition to the game, you will die often to it so its also recommended to not stay still and move positions frequently. Another issue you'll encounter is enemy aircraft, most of their suspended armament and even at times their main cannons or heavy machine guns will take you out with ease. Again, try to keep moving positions or try stay inside buildings, where enemy aircraft have no way of damaging you or you vehicle. The main armament on this vehicle is a 60 mm HVG cannon made by OTO Melara. It can fire two types of rounds, APFSDS and HE. The HE shell is useless due to the small explosive mass. The only shell you will use is M300 APFSDS shell. It will penetrate 249 mm of armour at close range, fairly decent as a light tank but not enough to penetrate the front of some heavy tanks. Due to the small diameter, the post-penetration damage it inflicts is limited. Try to launch attacks from the side or rear of the target, and aim for important modules first like the gunner or cannon breech. You might not get a one shot kill but you will divert the opponents' attention away from your teammates. The cannon is two-plane stabilized which gives you an advantage to shoot first as a light tank.

The story of the AUBL HVG begins during the cold war. The AUBL, also known as the Fiat 6616, was a joint venture between Fiat and OTO Melara. After the Second World War, Italy learned the need for light armoured and armed vehicles. After having built the Fiat 6614, OTO Melara experimented by seeing how adding a cannon would do for the vehicle, with also the main focus being for the Fiat 6616 to carry heavier armament for the armoured platoons of the mobile battalions. After several alterations the first prototype was built in 1972, and with many minor improvements, Italy would decide to buy 50 for the Carabinieri (Military Police). It officially entered service in 1975 with a total of 185 units produced. The fiat 6616 was a great light vehicle that would be able to reach high speeds of 100 km/h if on the right terrain. After Italy had bought theirs, it was decided that the next course of action was to put it on the market, countries such as Peru and Somalia showed interest and acquired the vehicle. Those countries actually used it in combat, specifically the Somalians. One of the many upsides of the Fiat 6616 was the ability of it being able to travel submerged underwater, making it more versatile and allowing to become even more stronger. It was able to fit many different types of armaments, such as a 20 mm Rheinmetall Mk.20 Rh 202 gun, a 60 mm OTO-Breda T60 quick firing HVG, French made HS90, FV101 turret, and also a 90 mm Cockerill Mk.3 cannon. Other equipment that could also be installed came in form of a unique flare dispenser which would be used for crowd dispersal, many different types of ATGMs such as Milan, MAPAT and TOW, and for export purposes it good to note that the Peruvian version would mount an HJ-73C Chinese made ATGM. After having a very extensive service record (Libya safekeeping, Lebanon UN safekeeping, protecting places of high interest in Italy) it was put out of service, now only some remain as static displays or are in storage inside Italy, however as previously mentioned some of the countries that acquired them still use them to this day. The AUBL/74 HVG was first seen in 1989, in the form of 1 singular prototype known. The AUBL/74 HVG would not be picked up by the Italian army nor anyone from the export market, although it could fire OTO-HE and MECAR APFSDS-T (which could penetrate up to 130 mm at 60 degrees from 1,500m), which allowed it to be a great reconnaissance vehicle for the time, the project didn't continue and OTO Melara continued to experiment on the vehicle by adding more and more diverse armaments in the hopes more nations would acquire it.