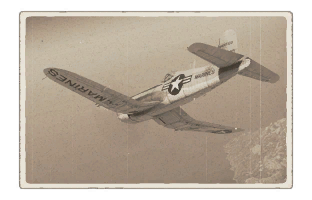 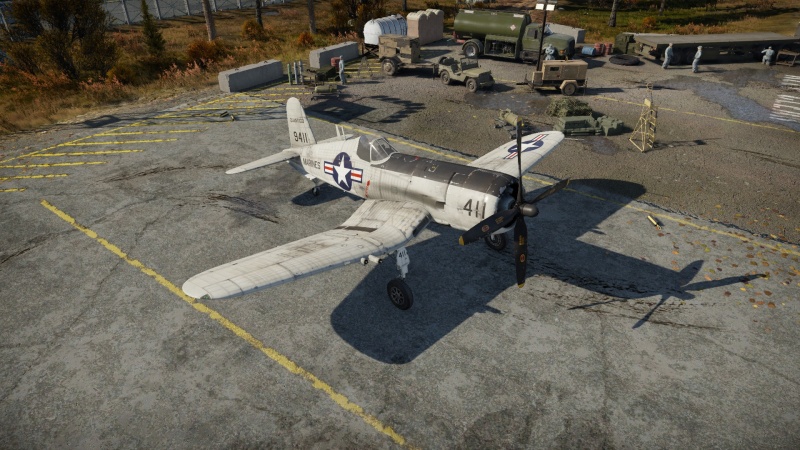 The AU-1 Corsair is a premium gift rank IV American attacker with a battle rating of 5.7 (AB/RB/SB). It was introduced during Update 1.97 "Viking Fury" as a reward for the 2020 "Space Race" event.

The AU-1 was a variant of the F4U Corsair developed from the F4U-5, and was originally designated as the F4U-6 but was renamed to AU-1. It was designed as a dedicated ground attack aircraft, unlike all the previous Corsairs which were designed as fighters. To fit that role the engine was optimized for low-altitude flight, additional armour was fitted, and the AU-1 had increased suspended armament capacity. Due to its design, the AU-1 is less manoeuvrable than its fighter counterparts and also has less high-altitude performance. With a large bomb load, the AU-1 can be incredibly heavy. Despite these factors, the AU-1 is still highly capable as a fighter at lower altitudes.

The AU-1 was delivered to the US Navy and Marine Corps starting in 1952, and was retired from both services by 1957 after seeing combat in the Korean War.

Compared to similarly tiered fighters, the AU-1 has mediocre flight performance, though the powerful engine and Corsair airframe allow it to perform decently as a support fighter at low alt when played to its strengths and not carrying ordnance. Although speed at low altitude is great, manoeuvrability is average at best, sustained climb quickly drops off with altitude (though it can zoom climb decently well below 2,000 meters), and high-altitude performance is significantly lacking. Compared to other attackers, the AU-1 has above average speed and roll rate. It cannot turn as tightly as Soviet attackers or the Skyraiders, but it is more effective at boom and zoom tactics than its contemporary attackers. Compared to other single-engine attack planes, it can carry a larger bomb load, but flight performance is hindered more by payloads. When facing other planes, the AU-1's greatest strength is its incredible speed at very low altitudes: at sea level, no axis or Soviet prop can catch an unladen AU-1 travelling at maximum speed in a straight line.

The AU-1's defining characteristic is its ability to carry incredible amounts of suspended armament - as much as a B-17 heavy bomber. In Air Realistic battles, the AU-1 can destroy two bases (bombing points), and in Ground Realistic battles, the plane has the potential to be absolutely devastating against enemy ground forces. From carpet bombing, rocket barrages or precision drops, this plane can do it all.

Additionally, the four cannons provide very effective frontal armament (they're some of the best 20 mm cannons in the game) and the high ammunition count is a nice bonus, too. They wreak havoc on enemy aircraft, deal considerable damage to lightly armoured tanks and wheeled vehicles, and in Air Realistic battles can destroy light pillboxes and light tanks.

As a plane designed to provide close air support, maximum engine performance was not needed at higher altitudes. This leads to significant losses in speed and climb rate as altitude increases. The AU-1 still climbs well and is incredibly fast at the very low altitudes it was optimized for. It is less maneuverable than other Corsairs or single-engine attackers and is extremely sluggish when carrying payloads. If engaging enemy fighters, it is imperative to maintain speed as you can not rely on maneuverability or acceleration to stay alive.

In Air Realistic battles, the AU-1 receives an attacker air-spawn. However its engine is quite weak at high altitudes, so players will be unable to take full advantage of the air-spawn to attack enemy fighters as they climb. If flown as a support fighter, the AU-1 is most effective when flown straight at climbing fighters, then baiting them to low altitude in high speed dives where it has a speed advantage and can perform to the best of its abilities.

In a high-speed dive, the elevator tends to compress worse than other Corsairs, but is still responsive enough

The XFU-6 prototype, a modified F4U-5N, first flew on January 31, 1952. It had been renamed the XAU-1. Because the AU-1 was designed for low altitude ground attack, and not high altitude flying, the two-stage, variable-speed supercharger from the F4U-5 was replaced by the R2800-83W engine with a single-stage, manually controlled supercharger. This optimized the plane for low altitude flying. The R2800-83W did not require scoops on the cheeks. Ordinance options were also increased. The wing pylon count was ten, an increase from eight. There were five pylons on each wing. Each wing pylon could carry a 5 in HVAR rocket, a 100 lb bomb, or a 250 lb bomb. To carry 500 lb bombs on the wing pylons, only the outer, middle, and inner pylons could be used, for a total of six 500 lb bombs. The AU-1 also kept the three fuselage pylons, which could carry drop tanks, 1,000 lb bombs, and the centre pylon could hold up to a 2,000 lb bomb. Napalm bombs, Bat glide bombs, and Tiny Tim rockets could also be carried. The primary armament was the same four 20 mm cannons from the F4U-5, with 231 rounds for each gun. These cannons were modified for the AU-1 so that they could be fired in pairs or together. If fired in pairs, the firing time was increased by one hundred percent. Because the AU-1 would be flying low altitude missions, it would require extra armour to protect the pilot, engine, and fuel tank from ground fire. 25 armour pieces were added, and the oil coolers were moved from the nose to the wing roots, protecting them from ground fire towards the front of the plane. The AU-1 was an exceptional ground attack plane, but it had reduced speed and manoeuvrability compared to the other Corsair variants.

Should You Grind The AU-1? - Sako Sniper
AU-1 Corsair - Engine And Elevator Too Weak For The Payload - Napalmratte