Difference between revisions of "AMX M4" 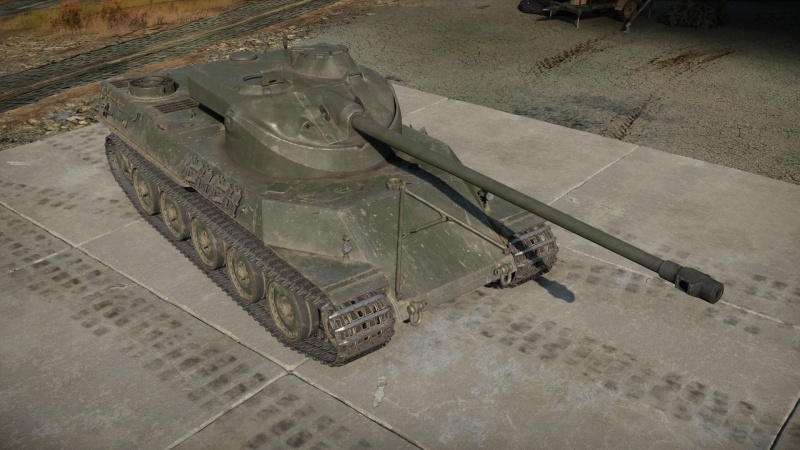 The AMX M4 is a rank IV French medium tank with a battle rating of 6.7 (AB/RB/SB). It was introduced in Update 1.75 "La Résistance". It uses the same 90 mm SA45 cannon as the ARL-44 but has a 7 round auto-loader and a better armour pattern while being more mobile. It is clearly better than any rank III French tanks, offering new battle opportunities.

This is the sturdiest representative of French rank IV vehicles, from which it shares some common features: good mobility, an oscillating turret (fitted with an auto-loader), sloped armour in front and back, high hull, high gun placement, good gun depression, 4 crew member, a coaxial MAC 31 machine gun and large tracks. What distinguishes the AMX M4 is its Panther-like hull, its efficient 90 mm SA45 gun inherited from the ARL-44 and the thickest armour pattern of all French ground forces with 80 mm sloped at ~55° in the frontal area.

As said above, this tank's armour is very similar to that of the famous German tanks, it's hull even shares the same general patterns and dimensions, the distinctive features being...weak spots: an almost flat portion between UFP and LFP and two 60 mm "corners" above the tracks. As for the frontal turret part, it is sufficiently thick to endure many nasty hits, as long as you do not leave your foe enough time to aim: the turret ring area, while still being 80 mm thick, is flat. As for side armour, it is a good reason to keep away from front line duty: 35 mm flat armour does not protect from anything bigger than HMG fire. the hull's back is sloped, which may deviate some shots and prevent long-range "back flanking". The most exposed part of this tank is the turret's back, with only 20 mm of armour between the bulge and the turret ring.

In sum, engage frontally, avoid anything bigger than a slight angle as it may expose the 60 mm UFP "corners". Distance is a great tool to avoid your weak spots being easily targeted. This armour's role quite fluctuates as it depends on if what it faces can penetrate it or not.

Dealing with an opponent AMX M4 leads to a new sort of challenge. It is hard to penetrate from a distance, but if you can do it, then it's sniper battle time. If your guns do not provide enough power at distances, then get personal: the closer you are, the better you can disable it, here are a few tips for dealing with an AMX M4:

Any French rank IV tank has a good gun capable of going through most armours at standard combat ranges (and above), they are even more frightful when knowing about their good reload rates (they all have autoloaders). With that in mind, engage them first so that they (maybe) will not have enough time to reload a second shell. Specifically, to the AMX M4, this tank's armour is virtually as resistant as a Panther tank: if you can't go through a Panther, you neither cannot with this tank, unless you shoot its weak spots. Don't panic though, its side armour is only 35 mm, which makes it very vulnerable to flanking and "multi-target" engagements: it can't protect itself well from two tank if they are enough apart from each other.

As for flanking onto a single AMX M4, it must be dealt with quick: its fast turret turning speed allows it to react quite fast to either of its sides. Try to disable its large gun breech first so it won't be able to fire in a long time (this may also ammo-rack it if detonating a pre-loaded ammo), only then finish it off, if the first hit/series of hits (SPAAs) does not disable it from firing back, consider yourself done.

Post-war French designs are all very good at moving around: they have good engines, wide tracks and can easily achieve ~40 km/h on most terrains. The AMX M4 may be the worst of them all, on par with the AMX-50-100 as they share a very similar hull, they still have above average mobility, when compared to other medium tanks at the same BR. This observation is based on the fact that this tank's reverse speed only reaches -5 km/h and it does not have the ability to do neutral steering, anything else is comparable to its contemporaries.

90 mm SA45 cannon
Autoloader
Automatically feeds projectiles into the breech. The speed does not depend on the skills of the loader
Ammunition49 rounds
First-order7 rounds
Reload6.7 s
Vertical guidance-8° / 15°
Main article: SA45 (90 mm)

The gun may feel a little lacklustre in terms of penetration: at the same BR, some tanks can consistently punch through more than 200 mm of armour while this tank's gun can't. This little defect is palliated by its auto-loader mechanism, providing up to 9 rounds a minute, a very good firing rate for the BR. All French medium rank IV tanks share this good reload rate, this is their prominent selling point.

The oscillating turret design also allows an high gun placement, this means you can fire over hills by exposing only the strong top portion of your tank, even more so with its good depression angles. When it comes to elevation, there is a problem: this tank can only lift its gun 15°, which make defending against planes impossible and uphill battle a bit challenging.

Ammo racks of the AMX M4

At its BR, 80 mm of sloped frontal armour is more than sufficient to endure close range fights (as long as it is facing the enemy with its frontal armour). But what this tank is really good at is, as any other French rank IV, sniping: a very good gun, great depression and fire rate make it very deadly, even more so that it can take a few hits. The AMX M4 offers the best survivability of all French rank IV tanks since its BR is low and armour, thick. It is a true "medium tank" capable of all roles, given the good context.

This tank can be used in almost all roles on the battlefield, as long as the context is on its side. Here are some roles this tank is the most efficient at:

This is clearly this tank's intended role: at all BR placements, it provides the best results for this tank. There is only a few things that can defeat such tactic: drastically better firepower and thick frontal armour faced towards it. This gun's performance is not the best at its rank, in that way, the AMX M4 may have to rely on surprise attacks to its foes' sides in order to disable them. Use this tank's great mobility to get into a good spot and reposition whenever it is needed do not allow approaching targets as they increase their chances to take you out. Plan you escape in advance: your reverse speed won't allow for hasty retreats.

When facing lower BR tanks, the AMX can easily be used in the same role as Panther tanks: breakthrough... but with reserve, your side armour won't allow even the slightest side shot. Use your good reload speed and turret rate to their best: fast reaction times and multi-target engagements are possible.

Use your speed and firepower to outpace the enemy advance. All considerations from the sniper role can be taken into consideration when flanking, the only difference being a more consistent usage of this tank's mobility.

The AMX M4 is not fit for brawling due to the relatively light armour it has. However, there is still a place for it in the Frontline if its commander is ever so daring. The supporting tank follows closely behind the heavy tanks, using them as shields. When an enemy fires at the heavy tank, the support tank should momentarily get out of cover, fire into the soft part of their frontal armour, cannon barrel, and/or the enemy's tracks. The support tank then comes back behind cover, readying itself for attacking again.

The AMX M4 wields this role well, as it has good manoeuvrability, good acceleration, and a quick firing cannon. It is however, a tall tank, so be wary of seeking cover behind any low-profile heavy tank and it has a below average reverse speed.

In the late 1940s, the French Army was looking to replace the medium tanks Panther and ARL 44 that were becoming obsolete with a new 50t medium tank. The new tank was to be the future spearhead of French armoured divisions. The French company AMX started working on a proposal which was essentially an improved Tiger II on the drawing board. The project evolved and later resulted in the AMX-50 tank. The AMX M4 present in the game is the first prototype of the project.

In order to save weight from the Tiger II's initial weight of 70 tons, the first AMX proposal was an underarmoured version of the Tiger II with only 30 mm armour plates. The French Army quickly indicated that such a thickness was too weak for the intended purpose. The armour of the hull was increased to 80 mm frontally and 40 mm for the sides and the weight-saving measures were then applied to other components. The original turret was changed for an oscillating turret whose design was already available and the suspension wheels were redesigned to get rid of the interleaving wheels. The new version was approved and a first prototype was produced at the end of 1949. It sported the already available 90 mm SA 45 gun from the ARL 44, whose performance was equal to the 88 mm KwK43 equipping the Tiger II. The first prototype was dubbed M4 and had a weight slightly above 50 tons. The second prototype was produced 1 year later with the 100 mm SA 47 L/50 gun and a slightly modified turret, and resulted in the AMX-50 tank.

The AMX M4 was the first prototype of what would be the AMX-50 and never saw either service or combat action with the French Army.