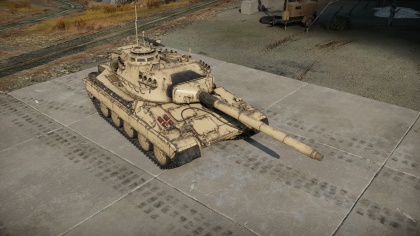 The AMX-30 Super is a premium rank VI French medium tank with a battle rating of 9.0 (AB/RB/SB). It was introduced in Update 1.89 "Imperial Navy".

The main armament to the AMX 30 SUPER is the 105mm CN-105-F1 cannon, which is very similar to the likes of the 105mm L7A3. This cannon fires APFSDS, HEAT, smoke and HE. It is recommended to at most keep 22 shells in the tank when playing Realistic Battles as its ready rack can carry 22 shells and this effectively removes most of the ammunition rack on the hull behind the fuel tanks (except 4 shells around the turret ring). It is recommended to take a loadout of mostly APFSDS with a few HEAT and Smoke shells just in case. The gun takes about 6.7 seconds to reload with an aced crew with max leadership and weapon reloading skill which is fairly standard among its competitors. The main shell, the OFL 105 F1 APFSDS is very capable of penetrating most of what it sees with a frontal shot as it has 350mm of penetration on 0 degrees 500 meters away. The OCC 105 F1 HEATFS may be very useful against light targets such as SPAAG or Light tanks. The OFPH 105 F1 smoke shell provides extra ranged covering smoke in order to mask you or your team (possibly even blinding the enemy) in combat.

The AMX-30 Super is armed with a coaxial 12.7mm (50cal) inside its turret right beside the cannon and a lighter 7.62mm (30cal) mounted on the roof near the commander's hatch. Although ditching the 20mm which is typically armed in other AMX-30s, the machine guns equipped can still deal fair damage to very lightly armoured vehicles.