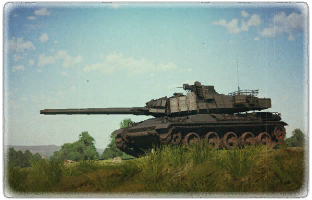 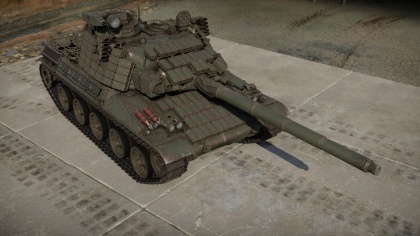 The AMX-30B2 BRENUS is a Rank VI French medium tank with a battle rating of 8.7 (AB/RB/SB). It was introduced in Update 1.77 "Advancing Storm". AMX-30B2 BRENUS, or Brennus in some sources, was a modernized French MBT which saw combat in the Gulf War.

The Upper frontal glacis are in two parts: Upper one being 50mm RHA sloped at 80 degrees and the lower one being 79mm CHA sloped at 70 degrees. The lower part is in theory able to withstand the T-54 APCBC shell better than the Leopard does. However, shots contacting the upper part will often resulting the shot bouncing upward and penetrating the Turret front, which is very weak(M18 GMC can penetrate it with ease). The lower plate is not as strong since it is not sloped that much, but penetrating this plate will often not result in a colossal damage. The curve joint between the upper and the lower frontal plate is very weak, and M18 GMC(Many US tankers actually use in this tier) can often one shot you through this area. Also, it is noted that there is a fuel container in the front of the tank protecting the ammo rack, which sometimes penetrating rounds will just set a fire just like T-54 does. The different thing is that AMX-30 tanks' first stage ammo rack is the hull rack, so after experiencing prolonged combat, you will find the hull ammo being emptied pretty fast.

Turret armor is not sufficient at this tier, nor at any tiers from Tier IV upwards. The gun shield itself mostly offers a 60mm-100mm protection. However, some sabot shots will get absorbed by the breech, which in comparison this tank offers a better protection than Leopard 1 does. Shooting the turret ring will damage the turret drives, and can sometimes trigger a crew knock out.

Turret sides are very weak, often gives you a protection around 60mm. The rear is worse, plus the turret ammo rack is placed at the end of the turret rear, shooting this area will kill the tank one shot.

Other sides of the Hull

The hull sides and rears are very weak. They are all 30mm plates. AA vehicles doing side shots will kill this tank fast.(for example, the R3 at 3.7 for Italy)

The ERA is what makes this tank sitting at 8.7. When sloped, the ERA at front of the UFP will offer a 400mm protection against HEAT. Mostly, this package is useless. However, since 8.0-8.7 is an actual BR in the game, you will encounter M551, M60A2, RakJpz and Kpz-70s which their drivers often fire missiles. ERA at the side of turret is at 260mm, talking about useless. Also you can sometimes roll high and deflect a 700mm pen Type 89 IFV's missile. However, there are multiple places in the front of the tank where no ERA blocks could be found

Turret front that is not the gun shield

The commander's cupola(mostly can only kill commander)

Shooting the turret front with APFSDS rounds can sometimes get pass all the turret space and detonate the turret ammo rack, in similar fashion with the M60 tanks.

The two FPEs are not available from the start!

When fully upgraded, the Engine offers a 750hp output at 2400rpm. Max speed is 65km/h, and the tank can achieve 45-50km/h on a map like Kursk(when driving downward, you can achieve 65km/h) Reverse gear is 27km/h, which is fast. The reverse gear is faster than Leopard 1's by 2km/h. The tank feels somewhat lighter than Leopard 1 series of tanks, since it has lighter weight.(note that Leopard 1 tanks have a 830hp output engine)