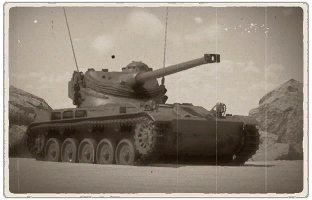 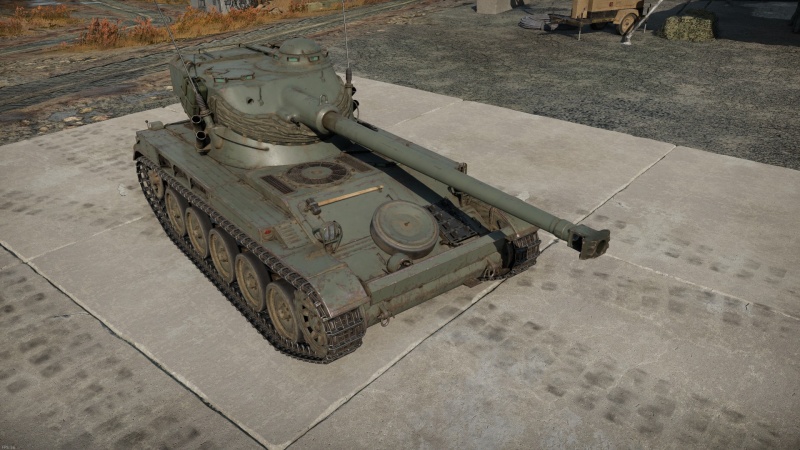 The AMX-13 is not the fastest for the BR, mostly losing to wheeled vehicles. However, the AMX-13 keeps a consistent speed regardless of the terrain, making it able to reach off-road positions much faster. On top of that, the excellent power-to-weight ratio also helps when trying to reach elevated positions.

The main drawback to remember is the sub-optimal reverse speed. The AMX-13 can only partially expose itself, a fully exposed AMX-13 will not be able to reverse back into cover in time.

How the AMX-13 can be used largely depends on what BR and nations it is facing. At a full down-tier, against 5.3/5.7 (AB/RB), the AMX-13 can be used at medium to long range as a travelling sniper. The main threats at that BR are heavies such as the American T34, the German Tiger II (H) and the Russian IS-2 (1944). These can all be penetrated in their respective weak spots at 500 m, however the further you are, the narrower the weak spots get, and there is no guarantee to disable them in a single shot.

In an up-tier, against up to 7.7, the AMX-13's long-range capabilities are greatly diminished. Most medium tanks become tough to deal with. Heavies like the IS-3, T32, M103 and Maus are a no-go, T-54s are particularly tough as well, the only mediums still easy to deal with at long range are the Leopard 1 and AMX-50. In this situation, the AMX-13 can still shine as a flanker, where you can use your rounds on the less-armoured sides and at a closer range.

It is important to remember that the AMX-13's round is a 75 mm APCBC with no explosive filler to speak of. The round struggles against any form of angled armour, and the post-penetration damage is not always sufficient, even destroying light vehicles from the side may prove difficult (the BMP-1 and Marder A1- being the toughest to deal with). The 5 seconds autoloader can alleviate that, but you will still need to aim strategically. When facing a medium or heavy tank frontally, the best option is sometimes to shoot the barrel and disengage (or, provided they are alone and close enough, get on their sides to finish them off). It will usually take more than one round to destroy an enemy vehicle (against large vehicles, even a direct shot to the ammo may not detonate it due to poor post-penetration damage), so disabling them with the first shot should always be your first priority.

Particularly when getting on the side of multiple enemies at once, focus on disabling all the enemies before attempting to finish them off. A shot to the side turret to destroy their cannon breech is usually the most optimal. This is particularly true for the American T34s and T32s. As for the IS-3, due to the angled turret, the easiest method is a shot to the rear turret, otherwise, a shot in between the hull and the turret is the only place that can be penetrated. On the side, it is possible to penetrate the Maus' armour, however it is a lengthy and dangerous process, and it is usually better to simply destroy its guns and let your team finish it off.

Finally, remember to pro-actively use the scouting ability, it can often save you in a pinch.